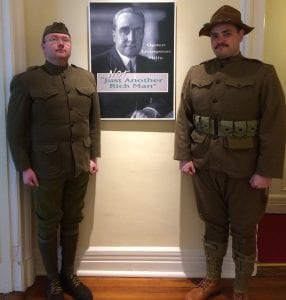 To commemorate the centennial year of the ending or World War I, Staatsburgh State Historic Site will offer a tour, “World War I and the End of the Gilded Age” on Saturday, February 24 at 1 pm.

The tour will last 90 minutes, and will include the unrestored servants’ area in the basement of the mansion, an area that is not shown on regular tours of Staatsburgh.

World War I reenactor, Joe Trocino, will be at the site in doughboy uniform, from 12:15 pm to 3:15 pm, to talk about the American soldiers’ outfit and display some of the soldiers’ standard equipment. Staatsburgh was the home of prominent social hostess Ruth Livingston Mills and her husband, financer Ogden Mills. The 79-room mansion on the Hudson River showcases the opulent lifestyle enjoyed by the wealthy elite of the early 20th century.

In a setting rich with Louis XIV furniture, Italian marble and 17th-century Belgian tapestries, the tour discusses the impact of the war on the Gilded Age and on the Mills family. The Millses’ son, Ogden Livingston Mills, quit his job as a New York State senator to join the army, and the Millses’ Paris home became American General John J. Pershing’s headquarters in France. An exhibit currently on view at Staatsburgh features an engraved silver tray given to the Millses by General Pershing to thank them for the use of their home.

By the war’s end in 1918, changes in society – including the enactment of the income tax – ushered in a new era. Within a generation of being built, many of the great mansions of the Gilded Age were gone, abandoned by families that could not afford them or no longer celebrated ostentatious displays of wealth. Staatsburgh remains as a time-capsule of the Gilded Age, with its original lavish furnishings intact.