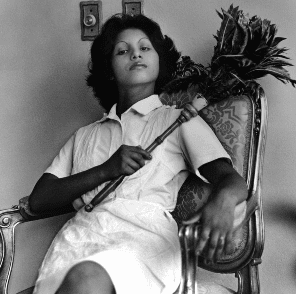 The only East-coast venue of the exhibition, Radical Women will be on view from April 13 to July 22 at the Brooklyn Museum.

An Opening Celebration: Radical Women in Dialogue on Saturday, April 14, 11:30 am to 6 pm at the Iris and B. Gerald Cantor Auditorium and Beaux-Arts Court, 3rd Floor. Tickets are $25. In honor of Radical Women’s opening weekend, talks and performances will be held by artists in the exhibition and in conversation with scholars. The daylong program includes a curator-led tour by Cecilia Fajardo-Hill and Andrea Giunta and a series of conversations with artists Yolanda Andrade, Catalina Parra, and others.

Target First Saturday on Saturday, May 5, from 5 to 11 pm, Museum-wide. This event is free. Boundary-pushing Latina and Latinx artists pay tribute to radical women throughout history in an evening of performances, films, talks, and art-making. Highlights include a performance by Combo Chimbita, Batalá New York, Riobamba, Jarina De Marco, and others.

Artist’s Eye will be held on Saturdays, May 12, June 9, July 14, July 21, at 2 pm, at the Morris A. and Meyer Schapiro Wing and Elizabeth A. Sackler Center for Feminist Art, 4th Floor. Tickets are $16. In-gallery talks by contemporary artists offer fresh and alternative perspectives on artwork on view. Featuring artists Esperanza Mayobre (May 12), Paul Ramírez Jonas (June 9), and artists in the exhibition (July 14 and July 21).

Performance Series will be held throughout July, from 7 to 10 pm museum-wide. These events are free. Experience a series of sociopolitically charged performances by contemporary New York-based Latinx artists that illuminate issues of our times, while reflecting on their connection to the exhibition’s theme of the politicized body. Presented with NYU’s Hemispheric Institute of Performance and Politics.

Radical Women: Latin American Art, 1960-1985 is the first exhibition to explore the groundbreaking contributions to contemporary art of Latin American and Latina women artists during a period of extraordinary conceptual and aesthetic experimentation. Featuring more than 120 artists from 15 countries, Radical Women focuses on their use of the female body for political and social critique and artistic expression. The artworks on view range from painting and sculpture to photography, video, performance, and other new mediums. For the full list of artists included in the exhibition, click here.