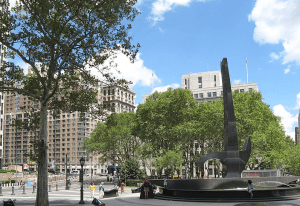 “History of Foley Square: New York Legal Landmarks & Civic Reform” will feature speakers who will discuss how Foley Square came to be surrounded by State and Federal courthouses and other buildings.

The talk will examine the migration of these buildings — some of them among the city’s foremost civic structures — within the context of the national civic center movement that arose in the early 1900s. The evening’s exploration will include a look at the important role taken by George McAneny, city planner and preservation advocate, in Foley Square’s development.

This event is hosted by The Historical Society of the New York Courts, and is free and open to the public.

Photo: Triumph of the Human Spirit at Foley Square in 2008.