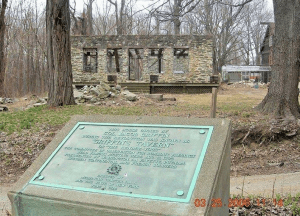 He is one of the great patriots of the American Revolution, and he is barely known outside of his native Dutchess County, New York.

Born in the Fishkill area ca. 1729-1730 (sources vary), Jacob Griffin was a staunch Yankee Presbyterian, who wanted a clear and a complete parting of the ways with King George III of England.

From the mid to the late 18th century the Thirteen Colonies of British North America experienced one huge wave of social upheaval after the other… the reasons of these societal changes being many and very subtly related to the other.

The political and philosophical fervor of this time period called The Enlightenment (or, also The Age of Reason) was to set the entire century of the 1700’s ablaze with new thinking that debunked superstition, religion and monarchical government and focused itself instead on rationalism, science and free and independent thinking. John Locke and Isaac Newton’s mathematical and logical ideas of looking at the world were quickly replacing “archaic” philosophies of the late Renaissance. Locke and Newton spearheaded England’s intellectual departure from older intellectual doctrines and were joined by other influential European thinkers such as the French Descartes, Voltaire and Rousseau.

In America, Benjamin Franklin, Thomas Paine, Patrick Henry and Thomas Jefferson pined for personal liberty and socio-economic equality with an unmatched and definitive eloquence and wit. But with this new freethinking came radical notions that sought to overturn and (finally dump) the feudal system of mediaeval Western Europe and to replace it with an authentic remodeling of classical Greek and Roman democratic ideals. These defined themselves by a total doing away with kings and queens and entailed re-modifying parliaments with congresses. America had been caught up in this philosophical firestorm.

Events in the 1700’s such as New York’s sensational Zenger trial, The French and Indian War and The Great Awakening (a religious and social movement that sought to counter The Age of Reason) made all of America fertile ground for argument and debate. The later occurrences of the Stamp Act and the Boston Massacre only furthered American divergent political and social attitudes, opposing traditional British ones, bolstered even more by very distant geography.

Once the New England Battles of Lexington and Concorde took place between bluecoats and redcoats in the spring of 1775, the War of American Independence was on. Shortly thereafter, in July of 1775, tavern keeper Jacob Griffin had helped organize a civic group called the Committee of Observation, which sought to (and successfully did so) draft a petition publically sanctioning American separation from Britain and openly supporting the Continental Congress. This was a comprehensive legal document that garnered over five hundred pro-patriot signatures (502 exactly) from the Fishkills vicinity of Dutchess County, New York. Similar petitions were in exchange all over New York Colony at this time. Culper Spy Ring members Caleb Brewster and Abraham Woodhull penned their names on one for the Town of Brookhaven (Suffolk County, Long Island) but in May of 1775, not July.

At roughly this same time Jacob Griffin joined the Dutchess County (Rombout Precinct) Militia as an officer with the rank of Captain. He would use his tavern as a congregation point for ten consecutive weeks starting on July 13th , of 1775, to gather additional support for American autonomy through this Committee of Observation. This committee was used for confiscating firearms from non-signers (Tories, or Loyalists as they were known, and not sympathetic to American freedom) but patriot neighbors, nonetheless. It was also used for collecting more pro-American signatures for the Committee of Independence, to be sent to the Continental Congress. These events took place in the following month (August) to strengthen the Colonial war efforts against the British.

Though many American colonists saw reconciliation with their King (George III) as a real possibility and a better alternative to war, the Siege of Boston and Battles of Long Island, Manhattan and White Plains (early 1775-late 1776) prevented any peaceful solutions to what had become a very bitter and virulent political and military conflict. Britain and America’s reckoning would be decided unfortunately by violent means (war). Jacob Griffin served under his fellow patriot’s (and also from Dutchess County) command of Colonel Abraham Brinckerhoff. Mr. Griffin had thrown in his lot against his former British kindred, like many of his other townsfolk. He never second-guessed himself.

Tories whose weapons were bought by the Continentals in New York, were duly compensated for them… those Loyalists whose firearms were confiscated by patriots had their names noted in legal records. It is hard to imagine at the Revolutionary War’s end if the Tories’ muskets were ever returned or repaid to them. The patriots looked on them scornfully and harshly throughout the War’s entirety, and were not, generally speaking, inclined to fairly barter with Tories, whom they regarded as enemies.

Jacob Griffin was promoted from his rank of Captain to Colonel in the Dutchess County Militia before the War for Independence terminated in late November of 1783. He served as a New York State assemblyman from 1786-1789, after the War. No extensive historical records exist of his potential military engagements or of his personality or physical appearance. Yet he ran and owned a well-respected and a prosperous tavern at Hopewell Junction during and for many years following the American Revolution.

General George Washington, Marquis La Fayette, and other high- ranking Continental officers such as Putnam and Steuben dined and slept under Jacob Griffin’s roof during the American Revolutionary War. Jacob Griffin’s Tavern was not only a conduit of U. S. democracy, but also a cradle of it. The Colonel’s tavern supplied vital American morale and legal authority to the Continental Congress, when… at this time… the Revolution’s success was in a state and condition of severe doubt and infancy. Though the Siege of Boston was a tactical victory for the bluecoats, almost all of America’s ensuing battles against Britain were failures. It was not until Washington’s resounding and brilliant wins over the redcoats at the Battles of Trenton and Princeton (in New Jersey) in December of 1776-January of 1777, that the patriots made their mark positively to check British aggression. Washington at this very juncture of the War’s history saved the Revolution, from what was then perceived by the Yankees, as certain doom at the hands of the British forces (under General Lord William Howe).

Colonel Jacob Griffin was a direct catalyst in America’s successful war activities against British domination and oppression. The Griffin Tavern, on Route 82, in Hopewell Junction, New York, played a very vital role in establishing our American independence from England by directly nourishing American feelings of self-sufficiency and self-sacrifice. Winning the War would not be easy…but winning the Revolution meant (for all Americans) gaining total freedom…to determine their fates, their fortunes and their futures, minus interference from (King) George 3rd any longer. Colonel Griffin and all his Yankee kinfolk made American liberty and British expulsion possible and real. By doing so, Jacob Griffin and his tavern dramatically and permanently helped to change the political, economic and cultural landscapes of not only North America, but also the whole of the world.

Griffin’s tavern was called the Rendezvous during his lifetime. He died on March 20th , 1800, in Dutchess County. Colonel Griffin is buried at the Presbyterian Church of Brinckerhoff Village, with the Du Bois and Diddell families of the Fishkills areas amongst his direct descendants. Learning his story is great way to bring you back to America’s earliest roots. And its through Jacob Griffin’s great story that he lives on.