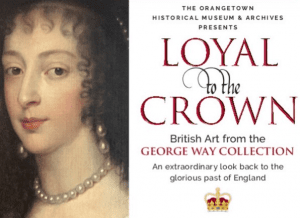 The Historical Society of Rockland County has invited the public to “Loyal to the Crown,” a New Exhibition at the Orangetown Historical Museum on Sunday, January 21, 2018, from 1:30 to 2:30 pm.

Mary Cardenas, Orangetown Historian and director of the Orangetown Museum, will guide attendees through “Loyal to the Crown: British Art from the George Way Collection.”

George Way’s collection of British art is culled from years of stalwart searching, it represents a cumulative view of majesty. There are miniatures of Queen Mary and Charles I; chests and chairs from the Charles II period; and beautiful paintings, such as a portrait of Henrietta Maria, wife of Charles I, attributed to Sir Anthony van Dyck.

The collection recalls a royal point of view from the centuries preceding the American Revolution. It is this tradition of loyalty and deference to the Crown to which the exhibition seeks to call attention.

In Orangetown’s hamlet of Tappan, the Revolutionary War’s most infamous British spy, Major John Andre, was tried and hanged after his thwarted collusion with Major-General Benedict Arnold.

For many, the power and wealth of England was indisputable; colonial loyalists viewed the Patriots’ quest to break from the Crown as an untenable breach. It was a clash of sensibilities that would explode into the formation of a new nation.

This is a meet-up announcement for history enthusiasts. All are welcome. Admission is free but donations are accepted. The Orangetown Historical Museum & Archives is located at 196 Chief Bill Harris Way, Orangeburg, NY.