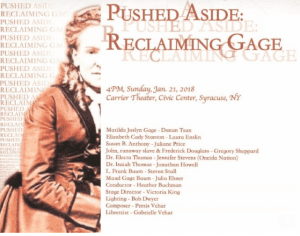 The world premiere of the opera, Pushed Aside: Reclaiming Gage, is set for 4 pm Sunday, January 21 at the Carrier Theater, Civic Center, Syracuse.

Pushed Aside tells the story of Matilda Joslyn Gage, the lesser known third member of the “triumvirate” of early women’s suffragists – the other two being Susan B. Anthony and Elizabeth Cady Stanton.

This opera tells how the three came together in the early 1850’s, then had their split in 1890, resulting in Matilda being “pushed aside,” and right out of the history books. Matilda fought for others who had been “pushed aside,” including African-Americans and Native Americans, and how she came to believe that all freedom struggles are equal and interconnected.

This opera tells the story of a woman of courage and integrity publicly defying 19th century laws that forced complicity with slavery and denied women their autonomy and liberty and the right to vote. This story shines a light on how Central New York became a hub of free thought and radical activism for ending slavery and promoting Native American rights as well as social justice.

The libretto by Gabrielle Vehar brings to life a pivotal period in CNY history, chronicling Mrs. Gage’s significant contributions during the first third of this 3 generation battle for equal rights for women. This fully-staged production with orchestra is made possible in part with funds from the Central New York Community Foundation.