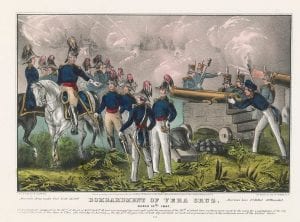 On the morning of August 28, 1888 residents of Dimmock Hollow (Ostego County) woke up knowing that it was going to be a memorable day. They couldn’t have known how right they were.

A political rally had been planned by local Republicans to support Benjamin Harrison in his presidential campaign against Grover Cleveland. They knew that the race would be close, nowhere more so than here in Cleveland’s home state of New York and wanted to whip up all the support they could get.

The Republican gathering was planned shortly after Democrats raised a liberty pole near the schoolhouse in Dimmock Hollow, a tiny crossroads between South New Berlin and Morris.

Republicans were determined not to let their rivals have all the glory. In the 19th century liberty poles raisings were important events for local communities; enthusiastic demonstrations of patriotism and unity for proud Americans. The very first liberty poles in the United States had been raised during the American Revolution as an act of defiance against the British. Later generations of Americans claimed the symbol for their political parties, making liberty poles a central part of their rallies.

As was the tradition, the Republicans decided to raise their own, taller, 124-foot liberty pole nearby. It was also customary for pole raisings to include a full day’s worth of revelry and celebration. It was a time when carousers could give raucous speeches, share a keg of hard cider, and make a lot of noise.

The Republicans planned an “elaborate program” for the day. A picnic and patriotic speeches for supporters and curious onlookers alike were organized to accompany the pole raising. But here is where this story gets interesting:  some of the more “athletic” Republicans thought the day would be more memorable if they fired a cannon during the proceedings.

An ancient six-pound cannon was hauled to Dimmock Hollow, said to have been a relic of the Mexican American War. It belonged to Addison Hill, whose father served in the war. Assisted by several fearless young men, powder and dry sand were mixed in equal parts and loaded into the cannon. The crowd, eager to hear the old cannon’s roar, gathered close to the gun. After the first discharge, one of the axles shattered from the explosion’s force. Undaunted, the men repaired it and reloaded. “The old cannon had a vicious recoil and it didn’t take many shots for the brute to kick itself loose from its carriage,” one witness recalled. Unfazed by the shattered carriage and dire warnings from a Civil War veteran in the crowd, Hill balanced the cannon’s muzzle on a log and readied to fire another Republican salute at noon before they paused for lunch. Afterwards they would all return and finally raise the liberty pole.

As the band began to lead the way to the picnic ground, an extra heavy charge of powder was prepared. Crammed in with paper wadding and tamped down with sand, the charge was packed into the barrel and the fuse lit. It only took a few seconds for the festivities to turn into a horrifying disaster as the cannon violently exploded. 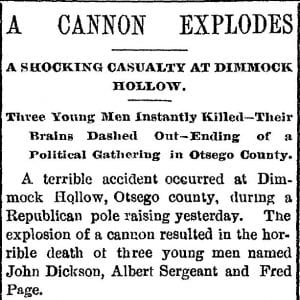 Several jagged pieces of the cannon were hurled into the crowd of onlookers and claimed the lives of John Dixon, Fred Sage, and his cousin Albert Sergeant. They were struck in the head and all died instantly. “The spectators stood as though paralyzed for a moment,” a reporter for Chenango American wrote, “and then the entire throng surged toward the three victims of the explosion.” All three men were had been standing in the nearby crowd with their families. They were all 26 or younger.

Onlookers tried in vain to aid their friends. One jumped on a horse and hurried to find a physician. When he arrived at the doctor’s office, he discovered that his “trousers from the knee to the bottom were bespattered with brains.” Alas, there was nothing that could be done.

No one ever figured out why the cannon exploded that day. Some thought Hill loaded the cannon with too much powder. Others thought that it was too old and shouldn’t have been fired in the first place. Hill was never able to give a satisfactory explanation. Oddly enough, none of the men firing the cannon were harmed, though one man did loose part of his hat. Most pieces of the barrel crashed through the wall of a nearby cheese factory several yards from the explosion.

Distraught, organizers abandoned the picnic and other later activities. The next day local papers reported that “the pole still lies prostrate and it is probably that no further attempt will be made to raise it.”

The Origins of Campaign Revelries: The Campaign of 1840

How could this have happened? Were presidential politics really this eventful in the 19th century? Yes, they definitely were. Though this particular rally at Dimmock Hollow’s ended on a tragic note, the day’s festivities were far from uncommon.

A lot of effort and excitement went into 19th century political rallies like this one. For the citizens of Dimmock Hollow, a presidential election was the perfect opportunity to support their candidate and have a good time…at the same time. Back then there were more connections between small town American life, politics, and entertainment than you might expect.

Partying through the campaign season was nothing new in 1888. A generation earlier, Americans had fallen love with the fun-loving, hard-drinking William Henry Harrison. Harrison was known as the “hard cider and log cabin” candidate, and supporters made entertainment a central part of his campaign. At an 1840 Whig convention in Ohio, thousands of spectators came to watch a huge parade that featured a giant log cabin on wheels. The cabin was decorated with live raccoons and plenty of mud. Its builders rode on the roof drinking hard cider. The party didn’t stop there either – barrels of free cider were on every street corner so supporters could join in the fun. Americans had never seen a presidential campaign like this before, and they loved it.

Although Harrison wasn’t personally involved in the campaign revelry (he preferred to stay at home and let his supporters campaign/party on his behalf), his campaign helped make politics more accessible and enjoyable to ordinary Americans.

Harrison’s cider-soaked and mud stained party campaign translated into great success at the polls. Other candidates took notice and began mixing politics and pleasure in their own campaigns. Political activities became a social and civic activity for voters. By making campaigns fun and inviting to all, candidates could count on more votes too.

When Harrison’s grandson Benjamin made his run for the presidency 48 years later, he kept the ball rolling. Literally.

The Revelries Continue: The Campaign of 1888

When the younger Harrison announced his candidacy, his supporters prepared a campaign full of pomp and grandeur. One stunt involved a giant steel and canvas ball that supporters rolled from town to town across the country. Built in Maryland, the ten-foot ball had political slogans brightly painted on for all to see. The giant ball was a replica of one built by William Henry Harrison supporters a generation earlier, and attracted large crowds of entertainment-seeking locals.

Though Benjamin Harrison’s ball didn’t roll through Dimmock Hollow, area Republicans planned their own festivities with the same spirit.

For ordinary Americans living in small towns and rural areas far away from Washington, D.C., national politics could feel distant and unrelatable. Local campaign events like those in Dimmock Hollow helped encourage locals to participate in the political process, and made it an enjoyable affair too. Even though there were many restrictions on who could vote at the time, these events were open to everybody in town. Entertainment opportunities could be scarce in tiny communities like Dimmock Hollow and presidential campaigns also created an opportunity for neighbors to gather and enjoy themselves regardless of how serious they were about politics.

Fun and games aside, campaign revelries also paid big dividends for candidates. Despite the tragedy at Dimmock Hollow, Harrison defeated Cleveland in his home state giving him enough electoral votes to win the general election. The race in New York was particularly tight: Harrison edged Cleveland out by just 15,000 votes. Victory in New York, thanks to Republicans in small communities like Dimmock Hollow, was the tipping point that won the election.

What Happened to Campaign Revelries? 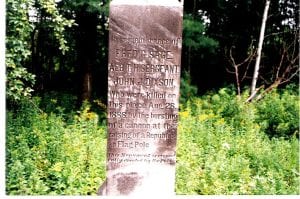 Grand small-town political festivities have lost the distinction they had in the 19th century. Since then, presidential candidates have taken a more personal role in their campaigns. With the development of television and radio, events are much more scripted and regulated by political parties at the national level. With this in mind, campaign rallies are often made for the broadcast audiences and not the local communities where they take place. The last grand liberty pole raisings took place in the early 20 th century and have not been seen since.

Though American politics look especially like a circus today, modern rallies and campaign events can trace their heritage back to the wild and woolly elections of the 19th century. Understanding where the campaign traditions of the time came from and where they fit in the daily lives of rural Americans can help us understand why political campaigns look like they do today.

Travel to Dimmock Hollow today and there are few reminders of the political revelries that once were the talk of the town. A few years after the tragedy of 1888, locals collected $120 to raise a small monument to their fallen neighbors. Today, the pillar is overgrown with brush and hard to find. It serves as a small reminder of three slain men and the colorful world of political entertainment they tragically represent.