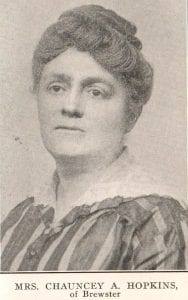 In Putnam County, the push for Women’s Suffrage began to heat up by the early 1890s and continued through the 1910s, with setbacks including the defeat in the election of 1915 in New York State. Numerous local women’s suffrage supporters gained traction for the movement by hosting and giving talks, organizing booths at local civic events, and marching in Albany and Washington, D.C.

This lecture will look at some local women’s involvement, including that of Mrs. Chauncey (Antoinette) Hopkins from Brewster, NY. The public is invited to have a look at participants’ family records and photographs between 1910 and 1920, to see which side of this great public debate local families were on, and join a lively discussion after the talk.