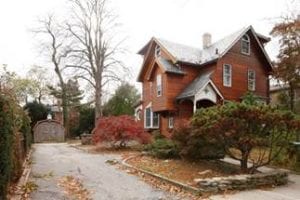 The Booth House, built between 1887 and 1893, is a fine example of the Stick style, which was popular in the late 19th century in suburban and rural cities. The Stafford House, a remarkably intact Sears “mail-order” house built in 1930, reflects the pattern of suburban-style residential development that occurred citywide during the early 20th century and represents an important period of technological and social innovation in the history of American housing.

The Booth House was designed and constructed by Samuel H. Booth, one of City Island’s most prolific contractors in the late 19th and early 20th centuries. It is a two and half story wood frame house that features asymmetrical massing, wood clapboarding, gabled roofs with deep eaves, a corner entrance porch, and angled bays, all typical of the Stick style. The Booth family owned the house until 1959, during which they added a rear porch, a gabled oriel on the east and an angled bay on the west. While the new owner renovated the house in the mid-1980s, building out the attic and replacing windows, the Booth house retains its historic Stick style. 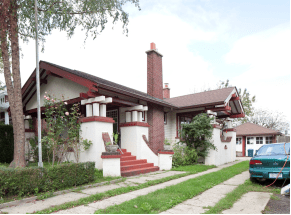 The Stafford House, originally constructed for the family of Captain John H. Stafford, a distinguished member of City Island’s maritime community, is an authentic Craftsman-style bungalow from Sears, Roebuck and Company. The one-story house, which features front and side porches with prominent gabled roofs and rustic materials such as stucco, wood timbers, and brick, is an excellent example of Sears’ “Osbourne” model, offered in catalogues from 1916 until 1929 and advertised as inspired by the “Golden West.” Owned by the Stafford family until 1991, the Stafford “Osborn” House survives largely intact except for minor modifications.

The Landmarks Preservation Commission is the mayoral agency responsible for protecting and preserving New York City’s architecturally, historically and culturally significant buildings and sites. Since its creation in 1965, LPC has designated over 36,000 buildings and sites, including 1,401 individual landmarks, 120 interior landmarks, 10 scenic landmarks, and 141 historic districts and extensions in all five boroughs. For more information, visit their website.

Photos from above: Booth House, and Stafford House, provided.