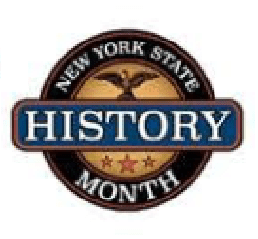 This year, the series starts on Tuesday the 7th with Liaisons Plaisantes performing music from the early 19th century. Music during the early part of the 19th century was not only entertainment but also connected people and communities. All along the turnpikes and canals of New York, music reflected the culture, political, social movements and a changing world view in light of new innovations.

On the 14th, columnist, author, and bookstore owner, Dan Weaver will explore the famous Marquis de Lafayette and his different journey’s through the Mohawk Valley during the Revolution and early American Republic. The Marquis is well known as the young French aristocrat who ventured to America during its fight for independence, serving as an aide to General Washington and carrying the spirit of 1776 back to France; but his journeys through the valley help paint a more dynamic portrait of the man.

Tuesday the 21st, Ashley Hopkins-Benton, a Senior Historian and Curator of Social History at the New York State Museum will present on “Votes for Women: Celebrating New York’s Suffrage Centennial.” She will speak on how the State Museum will commemorate the 100th anniversary of New York State women winning the right to vote as well as how curators have been exploring artifacts from collections around the state for their exhibit. At the same time, they have been actively collecting materials from the 2017 Women’s March. Learn about the process of researching artifacts for the exhibition, collecting from the Women’s march, and the parallels between the older and new materials.

The last of the series provides a conclusion to the celebration of New York’s rich cultural heritage; as Amanda Massie, Curator for the NYS Office of Parks, Recreation, and Historic Preservation’s Bureau of Historic Sites and Valerie Balint, former curator at Olana State Historic Site, will lead a culinary journey that links technology to food tastes and availability. Learn how exotic foods such as pineapple and avocado found their way into 19th-century cookbooks, and how the ability to serve them on Japanese imported plates became within the reach of middle class homes throughout the United States. Discover the math and science behind shopping, cooking and dining in this period.

All presentations are free of charge and will begin at 6:30 pm in the Enders House at Schoharie Crossing, 129 Schoharie Street, Fort Hunter. Refreshments will be provided and donations are always appreciated.

For information about this event and more, call the Visitor Center at (518) 829-7516, or email SchoharieCrossing@parks.ny.gov.

The New York State Office of Parks, Recreation, and Historic Preservation oversees 180 state parks and 35 historic sites, which are visited by 60 million people annually. For more information on any of these recreation areas, call (518) 474-0456 or click here.