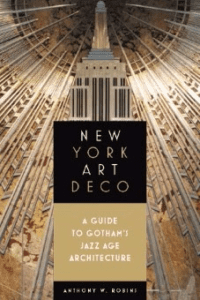 The Roosevelt Island Library will host historian and author Anthony W. Robins, who will give a lecture titled Art Deco Metropolis: Magnificent Buildings of Modern New York City, on Thursday, December 14 at 6:30 pm.

The Chrysler Building, the Waldorf-Astoria, and Rockefeller Center are among the hundreds of Art Deco monuments during the 1920s and ‘30s and that shaped the image of New York City as the world’s Modern Metropolis.

Coined in the 1960s to describe a style of French decorative arts, Art Deco now refers to design elements ranging from saltcellars to skyscrapers and produced anywhere in the world during the early decades of the 20th century, using abstract, stylized floral, geometric, or streamlined design.

A Q&A and book signing will follow the lecture.

The event, free and open to the public, is the third in the Society’s annual series of Fall Lectures.