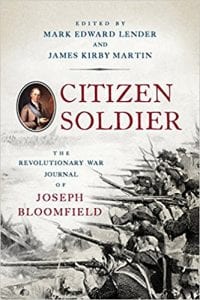 Bloomfield was an officer in the 3rd New Jersey Regiment from 1776 to 1779. His service took him from the Mohawk Valley (Guy Park Manor, Johnson Hall, Fort Dayton, Fort Stanwix and others) to Fort Ticonderoga in New York, to the battle of Brandywine in Pennsylvania, and to the battle of Monmouth in his native state. Also included are Bloomfield’s notes on the culture and behavior of the Iroquois tribes known collectively as the Six Nations, which played a crucial role in revolutionary New York.

“About sunset we made a stand, when I was wounded, having a Ball with the Wad shot through my left forearm & the fuse set my coat and shirt on fire.” Major Joseph Bloomfield write in his journal on September 11, 1777, describing his experiences during the hard-fought battle of Brandywine.

Unpublished and all but unknown when the first edition appeared, Bloomfield’s wartime journal provided scholars and general readers with new information on the Continental soldier; the revolution’s impact on society; warfare in New York, New Jersey, and Pennsylvania; and the motives and actions of the revolutionary generation.

This new edition of Citizen Soldier: The Revolutionary War Journal of Joseph Bloomfield — the first in thirty-five years — includes a new introduction and bibliographic essay by the editors.

The Friday, Nov. 10, reception starts at 7:30 pm with authors arriving by 8 pm. This book and other books by the authors will be for sale. Refreshments and beverages will be served. The museum is located at 389 Canal Street in Fort Plain.

There is no charge but a $5 suggested donation is appreciated. For more information, visit their website or email info@fortplainmuseum.org.