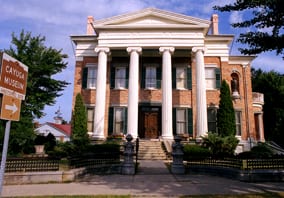 The illustrated lecture, “Seneca Falls: Was It the Beginning of the Woman Suffrage Movement?,” will be presented by Dr. Judith Wellman.

In 1848, one hundred women and men signed a Declaration of Sentiments in Seneca Falls, New York, asserting that “all men and women are created equal.” Political rights for women, including the right to vote, were one of their main demands. But was Seneca Falls the beginning of the movement for women’s suffrage? This talk, rooted in the lived reality of those who attended the nation’s first convention for women’s rights, argues that, while Americans had debated women’s suffrage since the late 18th century, the Seneca Falls convention touched off the first organized movement to promote it.

Judith Wellman is Professor Emerita from the State University of New York at Oswego and founder and Director of Historical New York Research Associates. She works with site-based community projects to uncover the history of movements for equal rights for all people, especially women and people of color. She is author of The Road from Seneca Falls: Elizabeth Cady Stanton and the First Woman’s Rights Convention and Brooklyn’s Promised Land: The Free Black Community of Weeksville, New York.

The Carriage House Theatre is located at 203 Genesee Street in Auburn, behind the Cayuga Museum. Admission is $10 museum members and $12 general public.