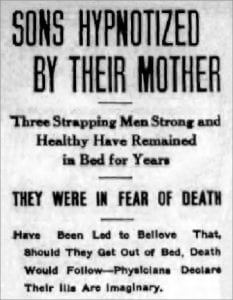 This story is about as bizarre as it gets. Locals in the Wells and Northville area were privy to the odd situation when it first came under public scrutiny a little over a century ago. At that time, a goal of regional counties seeking tourism dollars was providing easier public access to the Adirondacks, which was achieved in part by building new roads and improving old ones.

In southeastern Hamilton County, Northville marked the end of rail access in 1910. From there, stage lines carried visitors north through the hamlet of Hope to Wells and beyond. To accommodate automobiles, which were becoming increasingly common, the road to Wells was chosen for macadamization. The new, hard, flat surface would allow tourists to travel north independently, and then access stage lines from Wells into the mountains. The road would also drastically improve travel conditions for locals using horse-drawn transportation.

It seemed a winning proposition all around, but not for the John and Sarah Bennett family of Hope, about midway between Northville and Wells. Blasting by road construction crews in 1911 threatened the health of their three children, who were chronically bedridden in very delicate condition. The noise from the work, especially the tremendous dynamite explosions, caused such stress as to endanger the very lives of her three sons, said Sarah, who asked the county to halt construction, and even threatened to take matters into her own hands.

A reporter investigating her complaints visited the Bennett home and described the scene: “The babies sit in a row in the bed three times a day and are fed with a spoon. Their teeth are padded for fear the jar of closing jaws may stop their hearts’ action.” They were said to be “suffering from hereditary heart disease, and that the slightest extra exertion on their part will cause instant death.”

What a terrible burden for a mother to bear — or something to that effect — is what comes to mind, but in case you wondered how the word “bizarre” applies to this story, here’s where it fits. Sarah’s “babies” were George, 31, Ward, 29, and Frank, 27, all described as about six feet tall. Six feet long was a more appropriate way of saying it, for the last time any of them had risen from bed was a half dozen years earlier. Mom was 60 years old, and Dad, John Ward Bennett, was 67, but make no mistake about it: this was a household operated solely by Sarah. Her husband eked out a living on the family farm, which was all she needed from him. Everything else fell under her jurisdiction and direction. 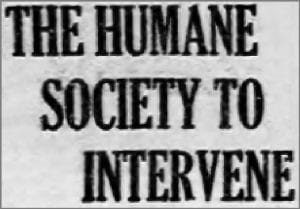 It was suggested by many local citizens and several newspapers that the Humane Society (a forerunner of modern social services) should step in and address the situation. Subsequent published stories confirmed that plans were under way for the society to intervene.

Amateur analysis by reporters and local residents mostly followed one line of reasoning: the Bennetts’ daughter, Maggie, had died in 1891 at age 15, and to prevent such a trauma from happening again, Sarah had taken total control of her sons’ lives, convincing them that each had inherited a heart condition capable of causing death from even the mildest physical or mental strain. Thereafter, they became bedridden, with Sarah caring for their every need. Since the condition was hereditary and untreatable, their lives would never change and the three would remain her “babies” until they, or she, died.

Some neighbors disputed that theory, telling authorities that Maggie didn’t just die as a teenager — she had fallen victim to the same type of restricted life Sarah later imposed on her sons.

Whichever way it began, the situation was mind-boggling. Controlling three children all at once, beginning at a young age, might have been conceivable, but the facts didn’t support that scenario. It was known that the three had attended school as youngsters, and worked on the farm into early adulthood, which were both indicative of an average upbringing. But it was also known that, starting when they were still young boys, Sarah had placed strict limits on their activities and seldom let them out of the house.

A full decade had passed after Maggie’s death when Sarah began convincing her sons that their hearts were fragile to the point where any physical activity would prove fatal. It began with Ward (he was actually John Ward Jr.) in 1901, when he was 18. A neighbor said Ward’s arm was sore from a vaccination, and after Sarah put him to bed, he was never seen again. While it’s not certain that’s how it happened, the age and date of disability are correct. Next was George, the second “victim” in 1904, when he was 24. After catching a bad cold while working on the highway, he was diagnosed by Sarah as having diphtheria, and George was henceforth bedridden. The last was the youngest, Frank, who joined his brothers in 1907 when he was 22, but the reason remains unknown.

It’s difficult to fathom that three strapping young men — with a farm to run, the Adirondacks at their doorstep for hunting and fishing, and at the prime ages for socializing — confined themselves to bed, convinced by their mother that death hovered above, ready to strike at any moment. Many attributed it to Sarah’s dominant, forceful personality, epitomized in a steely gaze of unusual power — victims effectively froze in their tracks, unsure of the consequences of disagreeing with her, and intimidated by her boldness.

A fourth brother had escaped the madness simply by being born first. Fayette Bennett, the oldest child, was already 20 years old when his sister, Maggie, died in 1891. He married during the following year, and by 1901, when Ward became the first to be “stricken,” Fayette already had three children and was leading a perfectly normal life not far from the family homestead. 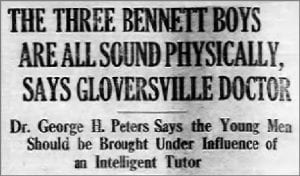 No one could explain with certainty how Sarah had succeeded in twisting the minds of young men — not children — and pulled their strings for more than a decade, controlling “boys” who (in 1911) were 27, 29, and 31 years old. Visitors to the Bennett house were rarely allowed, and could only talk briefly with whichever son Sarah designated as their spokesman. As always, a sharp glance from Mom subdued the boys to minimal interaction whenever she felt it was necessary.

But total control of anything is difficult to maintain, and the glitch that eventually turned Sarah’s life upside down was, oddly enough, macadam. To protect her children’s health, she fought against the road-surfacing plan that would ease travel and bring tourist dollars to the Adirondacks. To address the controversy, area officials paid visits to the Bennett home, where they learned what neighbors had long whispered about: three grown men were either mesmerized or held captive by their mother.

When Fayette was consulted about the situation, he recalled the strange goings-on two decades earlier when he lived in the family home, and the brother nearest to him in age was eight years younger:

“I was startled at the strange action of my brothers when in the presence of my mother. I remember distinctly how all three were constantly kept in the house, and while they told me they would like to go out, they seemed unable to do so under the strange power of my mother. Whenever they asked to go out like I did, a glance from mother quieted them. I was never affected by the powers she exerted, but thought it best to get away from her. At that time my father was a strong man, as he seemed able to dominate her. He confided in me lately, however, that he could no longer resist the power she had to make his mind lazy. It’s all strange to me, and I can only assign the strange condition to her strong will and her power to influence weaker minds.”

For part two: attempting to free the “prisoners,” click here.