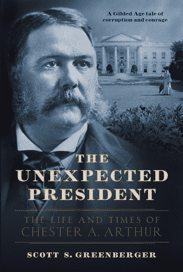 Scott S. Greenberger’s new book The Unexpected President: The Life and Times of Chester A. Arthur (Da Capo Press, 2017) is a biography of the dramatic, untold story of a virtually forgotten American president, Chester Arthur.

When President James Garfield was shot, no one in the United States was more dismayed than his Vice President, Chester Arthur. For years Arthur had been perceived as unfit to govern, not only by critics and his fellow citizens, but by his own conscience.

His short presidency proved to be a turning point of American history. This biography is the tale of a machine politician and man-about-town in Gilded Age New York who stumbled into the highest office in the land.

Scott S. Greenberger is the coauthor, with former Senator Tom Daschle and Jeanne Lambrew, of the New York Times bestseller Critical: What We Can Do about the Health Care Crisis. Greenberger is currently the executive editor of Stateline, a news website funded by the Pew Charitable Trusts that covers state politics and policy for dozens of US newspapers.

Greenberger was a newspaper reporter for twelve years, first at the Austin American-Statesman and then at the Boston Globe, and has also written for the New York Times, the Washington Post, GQ, Glamour, Washington Monthly, Moment magazine, and Washington City Paper. He lives in Takoma Park, Maryland.