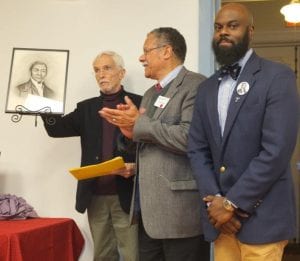 At 3 on Saturday, October 21 Christopher L. Webber, who nominated Pennington to the Hall of Fame, will present James W.C. Pennington: Pastor and Abolitionist for the Abolition Symposia. Webber, the author of American to the Backbone: The Journey of James W.C. Pennington from Slavery to World Leader, will use his research to present Pennington’s remarkable story. Pennington was born in slavery in Maryland in 1808. At the age of 19, scared and illiterate, James escaped from slavery. Moving finally to Brooklyn he found work as a carriage man and took advantage of night schools. In 1829 Pennington participated in the first Negro National Convention of which he became the presiding officer in 1853. Pennington served congregations in Long Island, Hartford, and Manhattan and traveled three times to England, Scotland, and the continent of Europe as an anti-slavery advocate. He was so respected by European audiences that the University of Heidelberg awarded him an honorary doctorate, making him the first person of African descent to receive such a degree.  Pennington was accepted as the first black student at the Yale Divinity School and was accepted for ordination in the Congregational Church. April 26, 2014 Yale University celebrated the opening of the James W.C. Pennington Christian Ministry Center.

While serving a congregation in Hartford CN Pennington became involved in the case of the Amistad captives and organized the first black missionary society to support them on their return to Africa. While in Hartford he wrote the first-ever “History of the Colored People” as well as a careful study of the moral basis for civil disobedience, which would be echoed decades later by Gandhi and Martin Luther King Jr. He was chosen to serve as a delegate to the Second International Conference on Slavery in London as well as to an International Peace Conference. Pennington helped organize a Legal Right Association for equal access to the NYC street car system. After the Civil War, he served briefly in Mississippi during reconstruction and then in Portland ME, and died in 1870 in Jacksonville FL where he had worked with freed slaves after the Civil War. Often deeply discouraged, Pennington retained a delightful sense of humor, intellectual vivacity, and inspiring faith.

Christopher Webber is the author of books ranging from a guidebook for Vestries to a study of Christian marriage. He has also written hymns included in several major hymnals in the United States and Canada. Webber is the author of Beyond Beowulf, a first-ever sequel to the English Saga. He co-authored A Year with American Saints, a book of 365 stories of men and women who have shaped American life. Webber has given lectures, readings, and workshops on his books at libraries and on television in several states, including Cazenovia Public Library in 2016. Webber, who currently lives in San Francisco CA, grew up in Cuba NY and lived in Brooklyn NY, Tokyo, Bronxville NY and rural Connecticut. Webber is a graduate of Princeton University and the General Theological Seminary in New York – with two earned degrees and an honorary doctorate from the latter. Webber is currently working on a biography of abolitionist Dr. James McCune Smith. Smith studied in Scotland in order to earn a degree in medicine.

The other three inductees will also be presented during the afternoon Abolition Symposia: Alicestyne Turley PhD will present Rev. John Gregg Fee at noon, Louise Knight will present The Remarkable Transformation: Angelina Grimké’s Journey at 2 pm, and Milton C. Sernett will present The Odd Couple: Beriah Green and Gerrit Smith at 3 pm.

During the 7 pm Saturday Commemoration Ceremonies Christopher L. Webber will briefly describe the legacy of Pennington as an inductee to the National Abolition Hall of Fame and Museum. Relatives, friends and associates who are sponsors of Pennington’s inductee banner for the Hall will introduce themselves and their relationship to Green. The sponsors will unveil the banner to be installed in the Hall. The Pennington banner will include Pennington’s official NAHOF portrait created by artist Melissa Moshetti, biographical information, his abolition legacy, and the name of the sponsors. (Seventy-five dollar sponsorships are due to NAHOF by October 8.)

Max Alden Smith, CoChair of the Annual Peterboro Emancipation Day will provide musical renditions of slavery and freedom throughout the evening. Rev. Jim Fletcher, Pastor of the Peterboro and Perryville United Methodist Churches, will deliver a Prayer of Reconciliation. Jan DeAmicis, Co-Chair of the Oneida County Freedom Trail Commission, will recognize the 182nd anniversary of the inaugural meeting of the New York State Antislavery Society.

The evening ceremonies will follow the 5 pm annual 19 th C. Antislavery Dinner catered by the Peterboro General Store Deli on the Green with a menu inspired by Elizabeth Smith Miller’s In the Kitchen cookbook. Tisha Lock, Head Merchant for the Peterboro Mercantile, will have books, buttons, stationery and other items related to the inductions, and Peterboro history, available at the event. Book signings by presenting authors will be available.

At 9 am on Sunday, October 22, 2017 Jan DeAmicis and Mary Hayes Gordon, Co-Chairs of the Oneida County Freedom Trail, will meet visitors in Utica for a driving and walking tour of abolition sites in Utica during Beriah Green’s life. The tour will include Green’s burial site and the site of the Oneida Institute, where Green served as President. At 10 am the new interpretive signage for the Oneida County Freedom Trail will be unveiled. For more information email jandeamicis@roadrunner.com.

At 12:30 pm on Sunday, October 22, eight libraries in Madison and Oneida counties, and the National Abolition Hall of Fame and Museum will host a luncheon culminating a month long CommUNITY Read of Sue Monk Kidd’s popular historical novel The Invention of Wings. The CommUNITY Read was launched September 24th during the Peterboro Women’s History Weekend following a program on the abolition movement’s spawning of the women’s movement of which Angelina Grimké was a pivotal person. After the luncheon prepared by the Peterboro Deli on the Green with a heritage menu. At 2 pm on Sunday, October 22, author Louise Knight will share her research for the preparation of her upcoming biography on the Grimké sisters. American Sisters: Sarah and Angelina Grimke and the First Fight for Human Rights will be published in late 2018.

This event is sponsored by a Humanities New York Action Grant. The National Abolition Hall of Fame and Museum (NAHOF) honors antislavery abolitionists, their work to end slavery, and the legacy of that struggle, and strives to complete the second and ongoing abolition – the moral conviction to end racism.