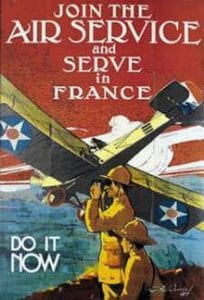 The United States Army Air Service was established during World War One by President Woodrow Wilson. Under commanding General John J. Pershing, the fledgling service began service over the skies of France in the spring of 1918.

By the end of the war, the Air Service had employed 45 squadrons covering 85 miles of battle front. 7Seventy-one pursuit pilots were credited with shooting down five or more German aircraft while in American service, while the Air Service overall destroyed 756 enemy aircraft and 76 balloons in combat.

Brian O’Connor holds a Master of Science in Library Science degree from the University of North Carolina at Chapel Hill and a Master of Arts in American History from Florida Atlantic University.

This event will take place at the Hancock House in Ticonderoga, Essex County, NY (on the circle) on Friday, September 22 at 7 pm.

Specific information regarding this and other historical society programs and events can be obtained by calling the Historical Society at (518) 585-7868, or on the THS website.