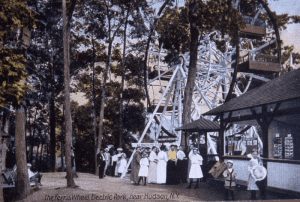 The ‘Electric Park’ exhibition at the Columbia County Historical Society (CCHS) is now open to the public.

The exhibit highlights the culture of Kinderhook Lake’s Electric Park, which operated between 1901 and 1920 in Columbia County, showcasing the phenomena dubbed by newspaper columnists as “postcarditis” – an obsession with sending and receiving postcards – featuring Electric Park postcards that offer poignant glimpses into daily lives of Columbia County residents and visitors during the early 1900s.

Electric Park was a term for amusement parks operated by railroad and electric companies in the turn of the 20th century.

Electric Park will be on display Saturdays and Sundays from noon to 4 pm at the Museum & Library building located on 5 Albany Avenue in Kinderhook.

CCHS members, students, and children can visit the Museum Galleries & Library free of charge; there is a $5 fee for non-members.