Decades ago, while researching my first book, the details of another very hot and difficult job were revealed to me by a kind and accommodating woman named Emma Johnson, who was 85 years old at the time. The subject was a remarkable place in northern Clinton County known locally as the Altona Flat Rock. New York State’s Natural Heritage Program, established in 1985, defined the Altona Flat Rock as “sandstone pavement barrens,” a natural rarity.

In general, sandstone pavement barrens are characterized by the following: a very shallow layer of soil over sandstone bedrock; nearly level bedrock, forming a surface similar to pavement; jack pines as the dominant tree; blueberry and huckleberry plants as the dominant shrubs; and lichens and mosses as the dominant ground cover. There is variation in each category, of course, but that is a near-perfect description of the Altona Flat Rock.

It took an entire book to describe the Flat Rock and its history, but in keeping with the theme here of heat and hard work, it’s important to know that much of the area is, in fact, flat, and many decades ago there were few trees to provide shade. The impact of being there under a hot sun is hard to believe without experiencing it, but can be likened to parking-lot temps or “temperature-on-the-track” readings from NASCAR, situations where macadam surfaces are far hotter than air temps.

One thing the fifteen-square-mile Altona Flat Rock was historically famous for was the massive growth of blueberries there and the huge business it became, supplying markets that included Boston and New York City locations. From the 1800s well into the 1900s, entire families in need of income followed the money by moving onto the otherwise unpopulated Flat Rock for a couple of months and harvesting berries from July to September. Some stores and businesses operated berry camps with numbered wooden shacks that were put up each summer and taken down for storage at the end of each season. Other folks camped in tents of their own making. 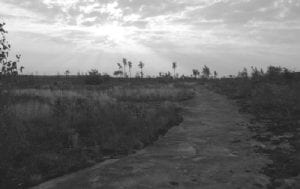 For some of you, Emma Johnson’s recollections of the old days might bring back memories of simpler times, when hard work was the key to survival. The period she addresses below is the early 1900s (her childhood), and from around 1915 forward, when Emma brought her own family to the Rock.

“During one summer, I went to the store and I bought bolts of yellow cotton and I made a camp.… I cut the camp out and sewed it all on a sewing machine with a flat seam, and we went back up there on the Flat Rock and we put the camp up. We took tar paper, and I sewed the tar paper onto the roof with twine. I sewed on the whole roof. One night we had a thunderstorm, and it tore all of the paper off of the roof! I’m telling you, we had it hard in those days.

“One summer we were at Cold Brook, and we had three store-bought tents. There was a Chamberlain fellow … that summer he came back to camp with us. To put the tents up we put stakes in the ground, and we had to tie some of the ropes to big stones.

“Often we spent the berry seasons in Trombly Brothers Camp at Cold Brook…. When we were ready to camp, the Trombly Brothers brought the wood to us and we would put the camp together. We didn’t move it around during the summer … it was stationary. Then, when we left, we had to tear it down and bring it back to them. They didn’t leave their lumber out all winter long. Those camps weren’t much of anything. They were just enough to keep the rain off of you, and that was about all.”

The camps provided only the bare essentials for survival: shelter from insects and weather, and a place to sleep and eat. For people like Emma Johnson, who had seventeen children, camp life meant long hours of picking berries while also seeing to the family’s needs.

“If there was a storm, we had to stay inside. I took advantage of the stormy days to wash and bake. At other times, I would be washing and hanging out clothes or baking bread at twelve midnight or one o’clock in the morning. We cooked on an old iron stove with a little cover on it. We burned wood, and we burned any garbage that we had. There wasn’t much garbage back then … we didn’t live ‘in the can’ like they do today. We didn’t need much refrigeration … we just fixed what we needed each day. We had salt pork that I put up myself. It kept for a week.

“Then, on each weekend we went home to go to church. Usually we didn’t pick on Sunday. We took that for our rest day.

“To keep my milk and other perishables, I dug a hole where it wasn’t all rock, and I put everything in jars and put it down in that hole. Then I’d take a big flat rock and put that on top…and you know, when you came to get that food, it was just as cold as ice, even in the middle of summer. Once when we camped, we brought a nanny goat on the Rock for milk for the baby. I think we milked that goat twice a day.

“Sometimes we had an outhouse for a bathroom, and we put up bunks to sleep on. To make the bunks we put up four big poles, and we put crosspieces on that, and then crosspieces the other way. Then we would take brakes of ferns, and we’d cut the ferns while they were green, and pack them on there. Then we put blankets on those ferns, and that’s where we slept all summer. It wasn’t very comfortable, but when you’re tired enough, you’ll sleep anyplace. We usually had three layers of bunks, because we had the top rows for the children, since they were the lightest. 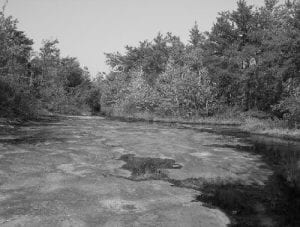 “I had one boy that was born on the 24th of June, and on the 9th of July I was on the Rock picking berries. He was brought up all that summer on condensed milk, and I had a girl that was big enough to care for him. I would only go a little way, and I checked back once in a while. And she could holler! If she got into trouble, she’d holler, and I’d hear her every time.

“For the baby, I had to wash [clothes] every day and wash every night. There was no time to wash in the morning because I got breakfast by the lamp. Back then you didn’t get very many hours of sleep. I’m telling you, when we went home, I was so skinny I was ready to fall apart.

“Well, you know, if you’d had time to rest and hadn’t been so busy, you would have enjoyed it more. You were in the wilderness, you might as well say, and with all of the nice fresh air and everything … the camping part was all right. I liked it, in a way. Of course, it was hard to sleep and to rest, because we didn’t have beds like we have today either. There were no mattresses in those days. Do you know that we made a tick, and we’d fill it with corn husks or straw, and every morning we’d fluff that all up … we’d take the broomstick and even it all up … we didn’t have any conveniences in those days.”

On a few occasions, I experienced extreme temperatures on the Flat Rock when a heat wave enveloped the North Country. From hikes I took — let’s say endured — in those conditions, stifling, knee-buckling, and even scary are adjectives that come to mind. I’m not sure how Emma did what she did, but as a bail-tossing, rock-picking, grave-digging boy of many hot summers, I bow in deference to her grit and persistence. She epitomizes the pioneer stock that built this country through hard work and determination.

She also provided more than her fair share of the nation’s building blocks through an expansive family tree. In 1985, when Emma passed away in her early nineties, she left an incredible 155 direct descendants: 10 of her 17 children were still alive, along with 48 grandchildren, 80 great-grandchildren, and 17 great-great-grandchildren. She was really something. The interviews I did with her back in the 1970s are among the many I still cherish today.