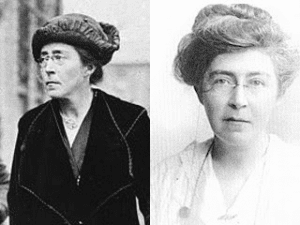 The American Irish Historical Society in New York City and the Irish Amnerican Heritage Museum in Albany will both host a program entitled “A Century of Protest: Hanna Sheehy Skeffington in the US.”

Hanna Sheehy Skeffington was Ireland’s most famous suffragette. When her husband Francis was shot by British firing squad during the Easter Rising, despite his being a pacifist.

Hanna undertook a lecture tour of the US, publicizing what had happened. This autumn her granddaughter, Micheline Sheehy Skeffington, also known for her fight for gender equality and justice, is repeating Hanna’s tour of the US all which will be filmed for a documentary.

Hanna’s prime motivation to go to America was to tell how her husband, Francis Sheehy Skeffington, had been shot without trial in Portobello Barracks, Dublin during Easter Week 1916.

She’d met Prime Minister Asquith in London to demand a full public inquiry. Instead, he offered her £10,000 ‘hush money’ (€750,000 today) which she refused. When the ensuing inquiry proved a travesty, Hanna resolved to go to the US and ‘tell the truth and nothing but the truth’ about what happened to her husband and to the Irish people at the hands of the British. Giving the authorities the slip, she sailed from Glasgow with her seven year-old son, Owen (Micheline Sheehy Skeffington’s father), using false passports.

More information about Micheline’s equality case highlighting the lack of promotion prospects for women in Irish Universities can be found here.