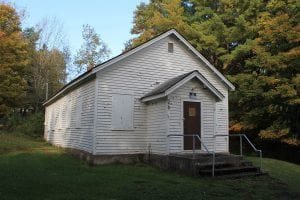 Gerry’s preservation and restoration efforts are responsible for the current state of many of the homes and buildings in Ferndale. Participants in the walking tour will have the chance to see Gerry’s work firsthand, and learn about the history of the hamlet.

The tour will commence at 10 am at the historic Ferndale schoolhouse on the corner of Ferndale-Loomis and Upper Ferndale Roads.

Once a vibrant stop on the O&W Railway called Liberty Falls, the hamlet changed its name at the turn of the 20th century to escape the stigma that Liberty had gained as a Mecca for tuberculosis patients. The name Ferndale came from the popular resort Ferndale Villa, operated in the vicinity by Joshua Gerow.

Ferndale suffered a devastating fire in June of 1913, just a few days after the village of Liberty had been struck with an even more destructive blaze, and was never quite the same. Still, it prospered until the railroad pulled out in 1957, most notable, perhaps for the massive trestle that spanned the valley there.

Maurice Gerry grew up in Ferndale and is well aware of its history and its heyday. When he returned to the area after many years on the West Coast, he purchased a dilapidated Victorian home and restored it as his residence. Then he did another building, and then another. Before long, much of the hamlet had been preserved and restored.

The walking tour is being conducted as a prelude to the 16th Annual Preservation and History Conference at the Liberty Museum & Arts Center later that day. Conference registration begins at 12 noon and the programs run from 1 pm to 5:30 pm.

The walking tour by Maurice Gerry is free and the public is invited. The fee for the conference is $45.

The Sunday events are the culmination of an entire weekend of activity hosted by the Liberty Museum & Arts Center. On Saturday, August 26, the Museum hosts the 22nd Annual Architectural/Historical Tour, which will tell the story of Grossinger’s and the role the area’s reputation as a healing environment played in its development. Visits to the hotel and to the site of Loomis Sanitarium are planned, with narration by architect Robert Dadras, historian John Conway and others. The fee for the tour is $25, but if participants would like to take in both the tour and the conference, there is a package price for both for $55.

Following the tour at 3 pm, participants can tour the Museum, which is celebrating its 20th year, and at 6 pm the 13th Annual Liberty Jazz Festival will celebrate the music of the Catskills.

For more information, contact the Liberty Museum & Arts Center at (845) 292-2394 or by e-mailing LMACinfo@libertymuseum.com.