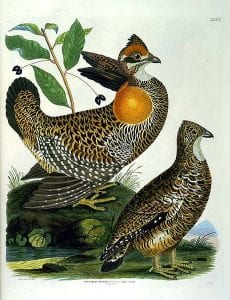 Recently, the federal government of the United States relaxed land-use restrictions designed protecting the greater sage-grouse, hoping the change might spur economic development via increased oil and gas excavation and expansion of cattle grazing areas. The grouse, a strange chicken-sized bird known for its flamboyant displays of plumage and bizarre, warbling vocalizations, once made its home on the great western prairies of the United States and numbered in the millions. Where settlers once encountered birds blanketing the landscape, today a mere five-hundred thousand remain.

A similar bird once inhabited the more eastern portions of the United States. The heath hen, a sub-species of grouse, exhibiting a similar appearance and familiar behaviors, extended along the coast as far North as Massachusetts, South to Virginia, and East to Pennsylvania. In New York, an environment of scrub oak and pine trees made Long Island an attractive home for the hens. Their habitat stretched from the pine barrens of Suffolk County west to the Hempstead Plains. (John Bull in his Birds of New York State notes that they may have also appeared in the scrub and sand plains west of Albany). As in other locations, it is generally assumed that here, a combination of hunting and habitat change led to the hens extinction. Still, it is only an educated assumption – the the Long Island heath hen and the causes for its extinction have gone largely unexplored.

As early as February 15 th of 1791 “An act for the Preservation of Heath Hens and Other Game” was introduced by Cornelius Bogart. The law banned hunting and consuming the birds between April 1 st and October 5 th . Later laws passed to protect partridge and quail included protections for the hens as well. Yet hunting continued unabated. Deemed “exquisite” a brace of the birds became an expensive, but not uncommon, repast for the gourmand. In later years a “Brush Club” formed. Members of the club vowed to refrain from shooting grouse between January and October (four more months than required by law) as well as aiming to encourage others to do the same (and at the same time punish poachers) was formed.

In one letter, a certain Long Island Linnaean, Dr. Samuel Mitchell, described how while a mother heath hen would flap and make noise, drag a wing, and feign injury to protect its chicks from a passing, but harmless, cart, the species as a whole was so unfamiliar with the human threat, that a single hunter could shoot an entire flock before a single bird would think of trying to make its escape. The story echoes accounts of the dodo, the kiwi, and other naïve island birds, unprepared for the wiles of mainland predators.

Besides the bird’s own behavior which left it unprepared for the hunter, it was a specialized animal, designed to thrive in a certain environment and certain conditions. As the Long Island Railroad developed, sparks from engines often set off immense conflagrations, leaving blackened ground for miles. Not only were the hens endangered by the heat of the flame, so was their habitat. (Ironically, studies of failure to reintroduce the hens to other areas of their former range have found that unduly suppressed fires may have lead to habitats of insufficient richness to support the birds). Beyond fire, the development of brushy plains and scrub-oak forests into towns, villages, and farmland left little living space left for the hens.

For millions of years, the heath hen had awaited the arrival of human beings to commence its extinction. By 1932, the Long Island heath hen had disappeared a century before. The last stand was made at Martha’s Vineyard in 1932. Since then, genetic study has found the Martha’s Vineyard variety to have been physiologically unique. Did New York’s population, of which so little has been written, and little scientific study made, have its own distinguishing peculiarities? Yet, some evidence remains of this onetime fixture of Long Island’s unique natural environment. Among scant remains, Walter Faxon has suggested that James Turvey modeled his female example from a living specimen of New York’s Tetrao cupido. If so, the image remains the only surviving life-illustration of a Long Island bird.