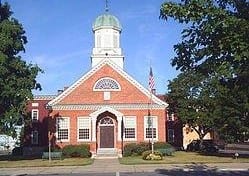 The Elizabeth Cady Stanton Women’s Consortium will place a historic plaque in front of the historic Fulton County Courthouse on the corner of S. William and W. Main Streets, in Johnstown where Stanton’s father, Judge Daniel Cady, practiced law.

Active since 2006, ECSWC is a collective of eight women’s organizations from Fulton and Montgomery Counties committed to honoring and continuing the advocacy for women pioneered by Johnstown native Elizabeth Cady Stanton. The Consortium supports women’s education, history, culture, leadership and equity through a variety of activities.

The Consortium applied for and obtained a grant from the William G. Pomeroy Foundation for a plaque commemorating Elizabeth Cady Stanton, noted suffragist who was born in Johnstown. Grants were available for markers to honor the anniversary of both New York State Women’s Suffrage (1917) as well as National Suffrage (1920).

The unveiling and dedication of the ECS Commemorative Plaque in front of the Fulton County Courthouse will follow.

At 5:30 pm, there will be a performance by Durey Creek Band in the Band Shell which will include a number of suffrage themed songs along with their regular blue grass repertoire.

The event is free and open to the public. Those attending are asked to bring lawn chairs. In case of rain the program will be held inside St. Johns Episcopal Church.

Photo of Fulton County Courthouse, where the new marker will be placed, provided by Laurie Kozakiewicz.