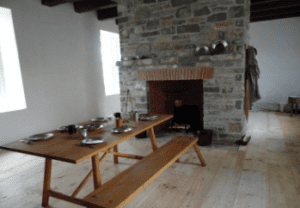 On Thursday, August 24 Travis M. Bowman, Senior Curator with the New York State Bureau of Historic Sites, will present “Slavery in the Mohawk Valley”, examining how slavery evolved in New York under the Dutch, British, and American systems of government and how the institution was utilized at a local and personal level in the Mohawk Valley. Usually considered a “Southern” issue, slavery played a surprisingly large role in colonial and revolutionary era New York.

The lecture will begin at 6:30 pm at Johnson Hall State Historic Site, with refreshments served at the conclusion. There is no admission charge, but donations to support Johnson Hall’s interpretive programs and ongoing restoration will be appreciated.

By the mid-eighteenth century, slaves appeared frequently in Mohawk Valley estate inventories, sale documents, journals and letters. The majority of those slave-holding households had only one or two slaves, likely tasked with housework and farming duties. Only a few landowners in the Valley held more. Jacob Mabee of Schenectady, in his 1755 will, bequeathed five slaves to his children. General Nicholas Herkimer of Little Falls is thought to have had between eleven and thirty-three slaves working his household, farm and portage business. The largest slave-holder in the Valley, Sir William Johnson of Johnstown, held around 30 slaves at his Johnson Hall estate.

Bowman is responsible for the research, care, and exhibition of the collections at New York State’s 41 historic sites and parks. Prior to moving to the Bureau of Historic Sites, he coordinated the State and National Registers of Historic Places for fourteen counties as part of the New York State Historic Preservation Office. From 2001 to 2007, he was Curator of Collections at Clermont State Historic Site, where he curated a major loan exhibit commemorating the bicentennial of the first practical steamboat voyage, which formed the basis for the published book Bobs’ Folly: Fulton, Livingston and the Steamboat. Mr. Bowman earned a Masters and Certificate of Advanced Study in Public History from the University at Albany, and a Bachelors degree in Anthropology from Tulane University in New Orleans.

Johnson, who created his English Georgian estate in 1763, was the largest single landowner and most influential individual in the colonial Mohawk Valley. His success in dealing with the Six Nations had a lasting impact on their relationship with the English, and largely influenced England’s victory in the Anglo-French struggle for control of colonial North America. Today, the main house and flanking stonehouses, originally surrounded by a 700 acre farm, interpret Sir William and Molly Brant’s family life through guided tours of the period room settings, educational programs and special events.