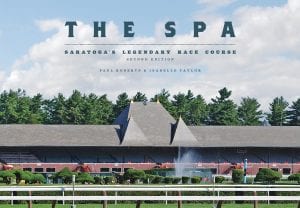 The Saratoga Springs Preservation Foundation will host an event honoring the history and future of the Saratoga Race Course on Tuesday, August 15, 2017 at 5:30 pm at the National Museum of Racing and Hall of Fame, 191 Union Avenue.

Following a reception in the Sculpture Gallery, Paul Roberts, an internationally-renowned expert on race courses, will give a presentation and sign copies of the second edition of The Spa: Saratoga’s Legendary Race Course beginning at 7 pm. The book highlights the history of the oldest sports venue in the United States.

Retired racecaller Tom Durkin will emcee the event. Paul Roberts will provide a further opportunity to understand the history of the development of the race course, review the recent developments and look forward to how Saratoga needs to evolve for it to retain its iconic status in the world of racing.

All the proceeds from the sale of the second edition of The Spa: Saratoga’s Legendary Race Course, underwritten by a grant from the Alfred Z. Solomon Charitable Trust, will support the Foundation’s ongoing efforts to preserve the Saratoga Race Course as the New York Racing Association moves forward with significant capital improvements such as the proposed At the Rail Building, the most visible and significant improvement to be made at Saratoga Race Course since the Clubhouse was constructed in 1928.

For more information or to make a reservation, call the Saratoga Springs Preservation Foundation (518) 587-5030, visit their website or email Nicole Babie, Membership and Programs Coordinator, at nbabie@saratogapreservation.org.