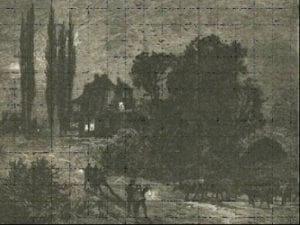 He recorded in his diary that by eight in the morning, “the sun was darkened.” It became so dark that one thought it was night time. Hasbrouck continued in his diary entry that it was not a solar eclipse. Citizens like, Richard Miller Devens, to the Northeast in New England, not only saw the reddish glow around the sun, but remarked, ”a black scum floated on rivers.” General George Washington camped to the south in New Jersey also commented about the unusual nature of the morning. Abraham Hasbrouck, living in Kingston, New York in Ulster County, had no idea that he was witnessing what would become known as, “The Dark Day.”

The Dark Day was remembered by individuals from New Jersey to Maine for many generations. When the day was darkening, and the air was choking, many thought the Day of Judgment had finally come. Some believing this started to pray, but others, one writer remembered, went to taverns to drink until the world’s destruction. Clearly, the end did not come, and in some cases cooler heads prevailed. Hasbrouck made no comment, we believe, about it being judgment day, in fact his entry reflects little more than an observation.

Early on his life, possibly as early as the 1720s, Abraham Hasbrouck started keeping a diary. We don’t know definitively how many entries were in the diary or when it was started. This is because the original has been lost. Numerous transcriptions are scattered in many archives. This one, that forms the basis of the article, was transcribed from a copy of a copy in possession of Joseph E. Hasbrouck of Modena. I have also referenced a copy in The New York Genealogical and Biographical Record. In his diary, Hasbrouck recorded such events as births, deaths, family history, notable weather events, and finally celestial events.

As the morning went on, Hasbrouck wrote, “it became darker and darker, it was so dark as if it was in the dark of the evening one could not read so dark it was without one being very sharp sighted and young…” This darkness he recorded lasted until four in the evening. Although he ended the entry with, “There was no eclipse of the sun,” what Hasbrouck’s contemporaries were witnessing the same day was frightening.

Individuals living in Massachusetts, saw bits of charred leaves, ash on the rivers, and could smell the burning of wood in the air. Their world too went dark around the time Abraham Hasbrouck reported the sun was blocked out for most of the day. Most individuals had no way of knowing that massive forest fires were generating the dense smoke, made worse by low barometric pressure, fog, and clouds. Some, according to Professor Samuel Williams of Harvard University, in an article written by Evan Andrews, heard reports of massive forest fires. Williams was dismissed by some as foolish. William’s wrote in “An Account of a Very Uncommon Darkness in the States of New-England,” that the fires could have been started by settlers that used the slash and burn method of agriculture.

While Hasbrouck looked at the events unfolding in Kingston, Williams reported that the “air appeared to be full of smoke and vapor. When it rained, it was “thick, dark and sooty…..Small birds suffocated from [the] smoke and ash.” It was confirmed by Dr. Tenney, who set out for his regiment in New Jersey from Rowley in Essex County, Massachusetts, that the Dark Day was worst in New England especially in Essex, New Hampshire, and Maine. He concluded this when discussing it with other individuals on his way to New Jersey, and his own observations. “Rhode Island, Connecticut were not as bad, and still less in New York. New Jersey was nothing that bad. During the 21st Century, the cause of The Dark Day was further investigated by scientists.

We now know there were indeed large forest fires because of the research conducted by the University of Missouri in 2007. A team from the University of Missouri went to the Algonquin Highlands in southern Ontario to study the trees that were there. They took samples from trees that would have been standing in 1780, and found signs of a, “massive, centuries-old wildfire.” It was further surmised, Andrews wrote, that “low barometric pressure and heavy winds most likely carried smoke into the upper atmosphere and over the Northeast, blotting out the sun.”

The phenomenon that Abraham Hasbrouck recorded in his dairy was beginning to end by 4 pm. It would continue in parts of New England until the following evening. It was not the only dark day to descend on New England. The Yellow Day of 1881, would also be etched in memories for a long time to come. It too was caused by a large forest fire in Michigan called The Thumb fire. It would not be as dark as The Dark Day that Abraham Hasbrouck mentioned in his diary.

Photo: One of the only artists depictions of the Dark Day, courtesy courtesy University of Missouri.