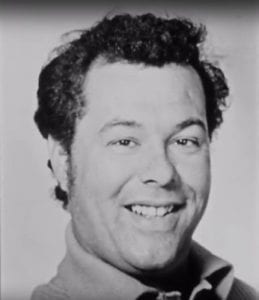 Bizarre. That’s the best description of events forty years ago when the North Country found itself the focus of national attention. I’m accustomed to researching much further back in time to write stories, but this one is a doozy that younger folks probably never heard of and older folks might have forgotten by now. It took place back in the 1970s when daredevils were popular, led by Evel Knievel, who became more famous for his failures — crashes resulting in multiple bone fractures — than his successes, where he landed safely and was unhurt.

Most of us who witnessed Knievel’s career will remember one jump above all others — Idaho’s Snake River Canyon. He performed on motorcycles, so the rocket-shaped vehicle he used in Idaho was named the Skycyle X-2. Canada’s answer to Evel Knievel was Ken Carter, a.k.a. the Mad Canadian, Kamikaze Ken, or Crazy Ken. He performed many times in upstate New York.

But Ken Carter jumped using cars, and like Knievel, he knew the value of promotion. Both of them did many “smaller” jumps that most sane people would not even consider, but to maintain public interest, they always had some truly outrageous event in the works. For Evel, it was jumping the Grand Canyon or the Mississippi River. For Ken, it was jumping Lake Champlain or the St. Lawrence River. Knievel eventually settled on jumping the Snake River Canyon, and Carter took on the St. Lawrence — sort of.

In August 1974, Ken was in Stafford Springs, Connecticut, where he attempted a jump that was aptly described by reporter John Grady: “Carter, who was jumping 12 new pickups with his motorcycle, should have tried 11 new pickup trucks instead. Carter did the dive bomber into the 12th pickup and bent himself up a bit. He is now mending in Hartford General Hospital.”

Carter’s “good leg,” as he referred to it, was broken in three places. It would take some time to mend, but true to daredevil form, Ken said from his hospital bed that a jet-powered car would carry him across Lake Champlain from a Quebec launch point to a landing site in New York State. The stunt was scheduled for July 4, 1976, two years down the road.

In November 1974, his record jump at Islip, Long Island, was covered by ABC’s Wide World of Sports, boosting Carter’s public profile considerably. He began pushing the planned jump of Lake Champlain, noting that it might take place over a mile-wide section of water, still landing in New York but launching from Vermont instead of Quebec. While acting as his own attorney during negotiations, he lost important land rights and was forced to abandon that plan. But his focus remained on a mile-long jump, something nobody had ever accomplished. He finally settled on a leap of the St. Lawrence River from Morrisburg, Ontario, to Ogden Island, New York, located in the St. Lawrence County town of Waddington. 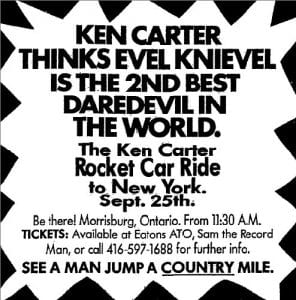 According to Carter, a rocket-powered Dodge Challenger would carry him down a 1,500-foot-long runway to a maximum speed of 300 miles per hour. The car would then launch from the ramp at a 12-degree angle, attaining a height of 300 feet above the river. Its “flight” would be guided by a missile launch system similar to the one used by Saturn V space rockets. Unlike Knievel’s use of parachutes for landing in the Snake River Canyon attempt, Carter foresaw a ramp-to-ramp jump, with his landing target a 200-square-foot bed of roses planted in a cow pasture. As he explained, the roses were a Carter trademark. “I usually give them out before a jump because I don’t know what kind of shape I’ll be in after.” And in this case, he added, failure was not an option: “If I hit the water, I’ll not survive.”

Several promotional jumps were held in advance of the big event, but July 4, 1976, came and went with no leap over the St. Lawrence. He later explained that the cancellation was in deference to Americans, who might be offended by his taking advantage of their nation’s 200th anniversary celebration. For that reason, the big jump was put off until September.

Meanwhile, he continued to perform, but was soon reduced to press events because of restrictions in a contract he had signed with ABC. Due to the network’s large investment, it was stipulated that Carter refrain from activities that could cause him to become injured and thus imperil the main event, which was scheduled for September 25.

The buildup through July and August was intense. Advertisements began appearing in newspapers, the Waddington Chamber of Commerce sold tickets, and Carter granted numerous interviews. Now nearing the end of his stunt career, Evel Knievel was hired by ABC to provide color commentary beside Frank Gifford for the Wide World of Sports.

The hype continued to build as numbers related to the event were disseminated through the media. The network had paid $80,000 for the television rights; a crowd of up to 60,000 was expected; two frogmen from the Apollo II water-rescue team were on hand if needed; the ramp was 85 feet high; and if successful, the flight would cover 5,467 feet in 23 seconds. Although advertisements referred to jumping “a country mile,” the actual distance from ramp end to landing was about a half mile. The rest was the acceleration “runway” leading to the ramp. The revised plan utilized two parachutes that would slow the vehicle for the landing — or splashdown. 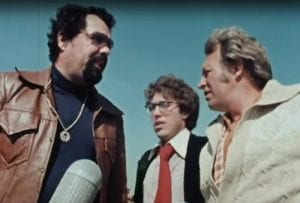 Evel Knievel assessed the site, reviewed the logistics, and concluded that he would not make the attempt. Carter, in one of his proudest moments, claimed that Evel said to him, “You’ve got to be crazy.”

In one way or another, the project had been in the works for about four years, but despite all the preparations, the jump was again postponed. Various reasons were given: bad weather had delayed completion of the ramp; there were problems with the rocket-powered car; and Carter’s health issues cast doubt on his abilities to handle the jump.

Continue to part two of Ken Carter’s story over at Adirondack Almanack, where it was first published.