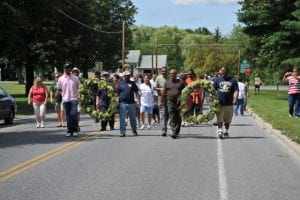 This last day of the exhibit Dreaming of Timbuctoo will open at 9 am. The exhibit includes Smith’s deed book of 119 pages listing, by county, the people who received land gifts.

In 1846 abolitionist Gerrit Smith recruited thirteen men to find 3,000 free black men to receive 40 acres of land each, in order to enfranchise them in New York State. Rev. Henry Highland Garnet from Troy mobilized the most grantees. Dr. James McCune Smith and Charles B. Ray found more than 1,000 African-American males from New York City to acquire land from Smith. Rev. Jermain Wesley Loguen was an active abolitionist in Syracuse, and as Smith’s agent he encouraged men from the Central New York region to make the trek northward. After Rev. Loguen toured the settlements he published his account in Frederick Douglass’ The North Star which recognized the worth of the land Smith was granting.

Following morning programs and a processional to the cemetery for a tour of slave graves, at 2 pm, Norman K. Dann PhD will explain the situation in NYS in 1846 that prompted Smith’s generous land gifts, remark on the progression of voting rights 1846 – 2017, and use Smith’s practical dreaming for discussion on the meaning of philanthropy. Dann, professor emeritus Morrisville State College, and the author of Practical Dreamer: Gerrit Smith and the Crusade for Social Reform, is the senior docent at the GSENHL, a founder of the National Abolition Hall of Fame and Museum, and a member of the Annual Peterboro Civil War Weekend.

At 3 pm, Amy Godine, the researcher and curator of the Dreaming of Timbuctoo exhibit, will describe the land, the grantees, and the agents. Gerrit Smith had the resources to enfranchise thousands of black males, but this experiment would never have begun or continued without the persistent aid of the agents. Garnet, Loguen, Smith, and Ray were among thirteen abolitionists who agreed with Smith’s plans and helped find eligible grantees to venture to the Adirondack region. (Rev. Loguen, one of the thirteen agents, will be portrayed by historical actor Djed Snead during the morning ceremonies.) Godine was a founding member of the National Abolition Hall of Fame and Museum (NAHOF), and is a member of the John Brown Lives board.

At 4 pm, a panel will join Dr. Dann to review the struggles for voting rights from 1846 to 2017. The panel will include Norm Dann, Jan DeAmicis (retired from Utica College, Co-chair of the Oneida County Freedom Trail, and a member of the NAHOF Cabinet of Freedom), Ann Jones (Deputy Commissioner at Madison County Board of Elections, and a former Gerrit Smith Estate docent), and Sheri Dozier Owens (Central NY Regional Director Intergovernmental and Community Affairs, Office of the NYS Comptroller).

The Deli on the Green will be open from 8 am to 7 pm with the ice cream window open until 9 pm.

Reservations for regular menu and for weekend specials are suggested at (315) 684-3131.

The public is encouraged to join any part or all of Emancipation Day. Admission is $5, free for students, and includes the Dreaming of Timbuctoo, Heaven and Peterboro, and Equal Rights Right Here summer campaign by I LOVE NY exhibits. Emancipation Day is a program of the Gerrit Smith Estate National Historic Landmark (GSENHL), 5324 Oxbow Road, Peterboro, NY.