When stuff doesn’t work, we either play Mr. Fixit or call someone. Whether it’s a job for your auto mechanic, furnace repair technician, or electrician, the expert usually has a good idea of what’s causing a particular problem. But sometimes malfunctions are real puzzlers.

From the 1870s well into the 1900s, mystery surrounded many incidents where faucets or pipes were opened but the water didn’t flow. When that happened, there were real consequences: a factory couldn’t operate or a school might close. For citizens lucky enough to have running water in their homes, it meant going without — or, if it were available, hauling water from community wells.

For a plumber, the natural assumption was that a clog was the culprit — a piece of clothing, a collection of sediment, or an accumulation of greasy materials. When nothing of the sort was found using the usual tools, a difficult search ensued — unless plumber was experienced. In that case, he might have suspected eels.

If you’re squeamish about creepy, crawly things, then you’re probably wriggling (like an eel) at the discomforting thought of eels in your water pipes. But it was once a thing, a problem familiar to engineers who designed water systems and the men who operated them. Population centers with water intakes drawing from large bodies of water were the most susceptible, but because eels are so adept at traveling up rivers and smaller tributaries, the problem could pop up at unusual locations.

As a private homeowner, imagine live critters coming out of your open faucet!

Ticonderoga, with Lake Champlain and Lake George close by, had its share of eel problems. The piping of water to homes and businesses in the village was begun in the 1870s, but it took time to work the bugs out — literally. In 1893, a resident of Lake George Avenue raised issues about water quality in a letter to the editor. There was mention of pipes spewing “eel juice, and pieces of eel skin, slime, and water bugs” in a water line from the upper dam. At least the writer had a sense of humor, complaining on the one hand, but also citing the potential benefits. “Some people say that eel skin is good for the rheumatism, applied externally; why not internally? If that is a fact, the people of Lake George Avenue will never be troubled with the disease.”

In the same village in 1904, when the water stopped flowing at Mary Holcomb’s house, F. E. Huestis and Son sent plumber Ed Bunker to clean the line. At the access valve, he removed three eels, “two of which were alive and about four feet long.”

In 1906, commentary in the Ticonderoga Sentinel addressed water problems that had suddenly worsened. “On those two days, the water was nauseating in the extreme and totally unfit to use. With a fishy smell and a fishier taste, the general opinion seemed to be that the trouble was due to eels in the pipes, and judging from the strength of the odor and taste, the pipes must have been pretty well filled with them, and in all conditions, from the live and healthy through the slightly ill and just dying to the long dead and decomposed. Live eels and rotten eels. Ugh! Horrors!… How the eels, if they are the cause of the trouble, get into the pipes is an unsolvable question, for the screen over the intake has been found to be intact; but get in they do, for they have been taken out on several occasions.”

Ogdensburg, located on the busiest eel waterway in North America, the St. Lawrence River, had plenty of problems as well. Eels come in all sizes, and the smaller ones tended to reach the narrower pipes that supplied private residences. A typical example in the Ogdensburg Daily Journal (1881) involved a plumber removing a foot-long eel that had clogged the pipe in a private home.

The same newspaper covered another incident in 1899, demonstrating how persistent eels can be in finding their way upstream. “Charles Lavier recently removed a lamprey eel, about nine inches long, from the water works of a house on New York Avenue. The eel had been obliged to pass through about a mile of water mains to reach the point where found. Several attempts were made to clear the water pipes of the house of obstructions before the cause of the stoppage was discovered and the eel removed. The plumbers forced him back so that the pipes were apparently clear, and in a short time he would return again and shut off the water from the tap. When a joint was disconnected, the cause of the trouble was discovered. The eel was shown at the Journal office.”

Homes were frequently affected in many communities, and for a long spell it was grudgingly accepted that having the occasional critter blocking a pipe or tumbling from a faucet was the cost of having running water in your home.

No matter what the situation, scammers and con artists arise to take advantage at a moment’s notice. In the 1880s, when eels were commonly found in water pipes, swindlers came to the rescue with a sleight-of-hand trick. “Salesmen” demoed faucet filters by attaching one to the kitchen tap, and then running the water for a minute or two before removing it. Lo and behold, a small eel emerged — at least that’s how it looked to the homeowner — and another filter was sold. (Young eels at a certain stage — called “glass eels” — were perfect for the shyster’s needs.)

Companies also felt the impact of slimy invaders grinding business to a halt. Some great examples from northern New York include: in 1872, the Corning mill at Troy was shut down for three hours until a five-foot-long eel was removed from a water pipe; in 1880, a four-pound eel was found blocking the flow of water in a Troy hotel; and in 1881, a dead eel stopped the flow in the water pipe of the Oswego Times.

During the summer of 1894, the janitor at the Mechanicville School was notified that a faucet in the building was clogged and was emitting a terrible odor. A dead eel, about eighteen inches long and barely fitting within the pipe, was found to be the cause.

The real hotspots for eel problems were big cities like Boston and New York. There are far too many incidents to mention, but a sampling shows some of the extremes that occurred.

The following year, Josiah Dutchee of New Haven, Connecticut, was among the first inventors to address the problem. Screens and filters had failed to do the job, so traps had been devised by many tinkerers. Dutchee’s patent application proposed “a new and improved Eel Trap for Water-Pipes.… The object of this invention is to provide an eel trap at the extreme end of the water-pipe let into a main or reservoir, so that the eels cannot enter a portion of the pipe.”

In 1902, 137 men at the Barrett Manufacturing Company in Brooklyn were idle for more than four hours during the effort to remove a 33-inch eel that had blocked the two-inch water line feeding the boilers. The company assessed their lost time at $300 to $400, equal to approximately $10,000 in 2017. 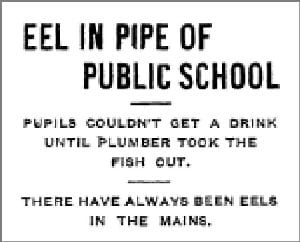 In 1904 at Poughkeepsie, every faucet in Public School No. 3 went dry. Pipes were cut and a large, dead eel was found blocking the main line entering the building. The Evening Enterprise noted, “Superintendent Smith thought it a pretty good indication that the standard of public education in this city has been raised several degrees when even the fishes try to get into our schools.” Too bad he didn’t think to mention fish traveling in schools! At any rate, Poughkeepsie’s superintendent of public works was not the least bit alarmed at the school issue, according to a published interview.

In 1905, an eel said to be 35 inches long and eight inches in circumference brought the Baltimore city-hall elevator to a halt by blocking its water supply (the elevator was hydraulically operated).

Church pipe organs, many of which were powered by water (they were called water organs), often fell victim to eels in the water pipes. And in that vein, a perhaps exaggerated article from 1908 described the effect of an eel invasion in one city.

“An epidemic of eels has Brooklyn in its clutches, and the natives have abandoned prohibition and taken up progressive profanity. Three-quarters of the water pipes are suffering from a rush of eels to the faucets. No place is too sacred for the visitors, and several church organs have entered into rest until such time as the wigglers shall be dispossessed.”

In 1912, even the mighty Waldorf Astoria Hotel had to call in plumbers to remove an eel from a pipe, and in 1923, several miles north of West Point on the Hudson River, an entire business block of Beacon was without water for a week. A street was finally dug up to access the main, which was found blocked by several eels.

While it sounds unlikely, many water management officials concluded over time that very small eels entered water systems through screen mesh that was meant to keep them out, and then grew too large to escape. No other explanation seemed plausible as to how eels of all sizes, and sometimes quite large, were gaining access.

That same conclusion was reached in New London, Connecticut, in 1923, when a number of water outages plagued the city. Newspapers carried the following story. 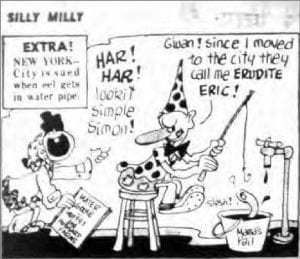 “From various places in Main, Bank, and State streets, eels were found packed together in water pipes and traps. ‘No water!’ was the cry heard on all sides. At each place, instead of water, eels were found in abundance. Fire plugs about the city were flushed and hundreds of eels were ejected into the streets.”

Modern developments gradually reduced the problem of lines clogged with eels, but as late as 1940, the National Gypsum Company’s $4 million plant in the Bronx was closed for ten hours until a 36-inch eel was found blocking a water pipe.

But eels in pipes aren’t always a bad thing. The concept has been used to help eels bypass dams, which have severely altered their range around the world. In several countries, the eel-pipe connection is used to feed families and earn income. Check it out. You’ll find this video, plus this one, and others like them, that reveal simple but ingenious methods of gathering a day’s catch.