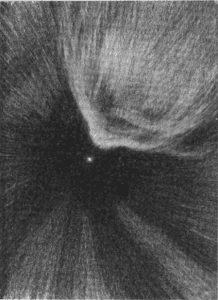 Recently a study of the cause of “bright nights” – evenings on which the sky gives enough light to read a book or newspaper – appeared in Geophysical Research Letters before being reported in a number of newspapers and popular scientific publications. Part of the story’s appeal is undoubtedly the claim that such strange phenomena have been experienced repeatedly and regularly throughout history.

Pliny the Elder, for instance, is said to have described the appearance of a “nocturnal sun” and the transformation of night into day, while an 1842 description recalls ne’er-do- wells exposed by a midnight at once transformed into midafternoon. The letters of mid-19th century Parisians reported surprise at being able to make out people and objects previously obscured by shadow. The reports of a Copenhagen observatory of the early 20th include a more scientific accounting. That such astronomical oddities, though infrequent, occur regularly would suggest that New York ought to have had its share of bright nights.

Now, it should first be noted that the authors of the paper deal specifically with the phenomena of airglow. Meteorites, zodiacal light, luminescent haze, and unusual reflections of the moon have all been known to bring unexpected illumination to our evenings. In light of Shepherd’s statement to the American Geophysical Union that “the historical record is so coherent, going back over centuries” bright nights are rarer and more variegated in cause than we might expect.

Regarding historical examples go, Shepherd and Chu draw frequently from M. Herre, a French astronomer who wrote a short paper on the history of the phenomena, and who, in turn, drew a number of his own examples from the Handbook of Unusual Natural Phenomena (1977). To compose the handbook, an extraordinary compendium of unexplained meteorological events, William R. Corliss read through volumes of journals from the mid-19th to 20th century copying hundreds of scientific and first-hand observations. It remains an invaluable and unique reference – so far as this particular topic is concerned. As it happens, the handbook also gives an example of one particularly bright New York night.

On May 14, 1921, Latimer J. Wilson noticed an “unusual illumination” in the southern sky while on Riverside Drive. At first it seemed like a cloud reflecting the light of the moon. Gradually, though, the “cloud” began to grow, becoming greenish in color.

Over the next hour, a long streamer of light appeared pointing toward Arcturus. A circle of cloud encircled the star (the night had been clear previously). From the north, the ring of cloud moved inwards, like, as Wilson puts it, “a puff of smoke leisurely blown from a cigarette,” growing brighter and more iridescent with beautiful colors, “peacock green, and lavender being the most conspicuous.” The effect of the growing lights, brightest where encircling Arcturus, pulsing and changing, lasted at the peak for only 7 or 8 minutes. As the bright clouds and needles ascended, they seemed to disappear into the black circle. At zenith, the light of the aurora was brighter than the moon. Wilson was already drafting his report for Popular Astronomy.

Meanwhile, theatre-goers leaving Broadway marveled at the spectacle. On the roof of the Times building, reporters, having discovered the telegraph lines to be curiously blocked, gathered to watch the aerial kaleidoscope.

For veteran telegraph operators, the phenomenon was unprecedented. The charge of the current jumped wildly: high, neutral, negative. Oddly, wireless radio signals became strengthened, with the signal from Berlin coming in especially strong. The next day, papers reported that the Central New England railroad station (also home to the telegraph switchboard) had burned. to the ground. Between this and other conflagrations – one as far away as Sweden – the Northern Lights were deemed a firebug.

The lights would be visible in New York, California, and Nevada. In particularly rural areas, the lights were said to be brighter, appear closer to the ground, and even move with a swishing sound.

The following week, railroad and telegraph service had been restored, though one of Western Union’s transatlantic cables was still showing signs of damage. Delays and damage lead to some referring to it as the New York Railroad Storm.

Papers reported on scientific opinion. The naval observatory had reported activity of sun spots many times the size of the earth acting particularly active, seemingly confirming Brasher’s solar explanation for the Northern lights. Other astronomers suspected Jupiter’s orbit to have been a contributing factor to the strength of the storm. Others drew somewhat stranger conclusions.

At the time, the inventor of the famous, but justifiably controversial theory of relativity was amidst his first trip to New York, lecturing to raise funds for Hebrew University. Famous for his challenge to Newtonian physics, Einstein had been greeted by enthusiastic crowds and paraded down the streets of the city to his hotel when he arrived in April. While relativity was often given pride of place by the impressed, half-bemused press, along with the pronouncements of the genius on anything from philosophy to religion, it was only in 1919 that physical confirmation for the theory had been observed (in the form of an eclipse). For some, relativity was still too strange and proof too wanting.

Professor K.K. See of the U.S. naval observatory on Mare Island found in the aurora a convincing counter-example. Einstein’s ideas were predicated on the non-existence of the ether, a universal substance, or background, in which all matter is suspended. The ether had been an important aspect of the 19th century worldview as well as a necessary for certain mathematical equations. The recent aurora had actually, in the mind of professor Kee, proved the existence of the ether, disproving Einstein’s theories and showing them to have “no physical basis.”

Of course, Einstein would be shortly justified. While no prize was awarded in 1921, in November of 1922, the Nobel Prize for physics was awarded for the previous year. The prize was not given for the earth-shaking ideas of relativity, but the less well-known photoelectric effect. On May 30th Einstein left New York for Europe. From the pier, observers watched as the famous scientist finally lit the pipe he had so often brandished during his lectures. A puff of smoke slowly rose into the sky.