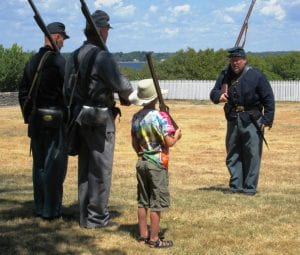 Sackets Harbor became a major recruiting station and mustering site for Northern New York where thousands entered into federal service to fight for the Union in the Civil War.

Visitors can also learn about the Sons of Union Veterans of the Civil War efforts to perpetuate the memory of Civil War veterans by restoring grave markers and statues, conducting remembrance services, and doing living history education programs.

Tours of the Commandant’s House give a glimpse into life at the Navy Yard in 1860, just before the Civil War. The Sackets Harbor historic site is open Monday through Saturday 10am to 5pm and Sunday 1 to 5 pm.