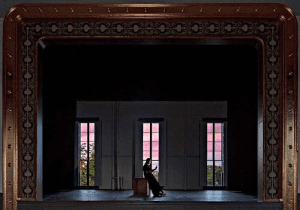 Hudson Hall’s opening season celebrates the return of New York State’s oldest surviving theater to public use for the first time in over 55 years with exhibitions, workshops, performances and events that highlight Hudson’s vibrant artistic community, including a new staging of Virgil Thompson and Gertrude Stein’s The Mother of Us All. This rarely performed opera is based on Susan B. Anthony, who spoke twice at the Hudson Opera House. Conceived by the visionary young stage director and Hudson resident, R. B. Schlather, the production stars mezzo soprano Michaela Martens and a vocal and instrumental ensemble of over 30 Hudson Valley residents.

In keeping with the theme of homecoming, this season sees the return of artists whose work first took shape during residencies at Hudson Hall, before and during restoration. On July 21, Hudson-based choreographer Adam H. Weinert brings his critically acclaimed dance piece, MONUMENT, developed during his residency in the pre-restored theater in 2014. Renowned New York City string quartet ETHEL (Artists in Residence in 2016) also return in September to stage their fully realized multimedia work, Circus: Wandering City, in advance of the world premiere at the Ringling Museum in Sarasota, Florida, kicking off a two-year world tour.

In August, LightField Festival returns to Hudson Hall with JUST THE FACTS, an exhibition of photography and multimedia art, while local favorite Hudson Jazzworks energizes the music community once again with their annual workshop concert.

Photo: R. B. Schlather on the stage of the newly restored performance hall; portrait by Matthew Placek, provided.