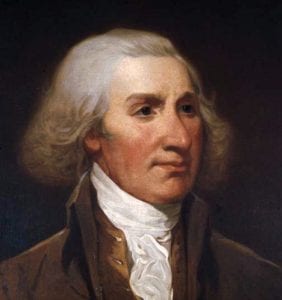 It is notable that Hamilton, Schuyler’s son-in-law, who spent only a few years at Schuyler Mansion, is boosting popular attendance there.

In fact, the musical, based mostly on Ron Chernow’s superb biography of Hamilton, has transformed him into something of a history superstar. Political conservatives and liberals both claim him as a champion of their views. Last year, when Treasury Secretary Jack Lew announced plans to replace Hamilton on the $10 bill, many people (including a few historians) protested, and Lew relented. (Instead, antislavery activist Harriett Tubman will replace Andrew Jackson on the $20; Jackson will be moved to the back of the bill.)

Hamilton is great but so is Philip Schuyler. Schuyler’s place in history should not depend even in part on having an illustrious son-in- law. In fact, Schuyler (1733-1804) is a good example of a notable New Yorker who is under-represented in historical accounts. He compiled an unparalleled record of leadership and service: Albany city council, colonial Assembly, Continental Congress, Continental Army general, state Senate, Regents and U.S. Senate.

Schuyler completed construction of the mansion in 1762. After his death in 1804, it passed to family members and then to other owners who put it to various uses, including an orphanage. The state purchased it in 1912; history-minded Assemblyman (later Governor) Alfred E. Smith was a co-sponsor of the bill that authorized and appropriated funds for the purchase and restoration. The state rehabilitated it and restored it as close to its original state as possible. It was dedicated as a state site on October 17, 1917, the 140th anniversary of the Battle of Saratoga.

At the dedication ceremony, governor Charles Whitman called it a monument to “as fine patriotism as the world has ever known.” He praised Schuyler as a model of “gentleness and courtesy, faith and honor, character and integrity.” Whitman continued that “he was the Spirit of America…He loved the great State [New York] which will forever love him.” A century later, though, most New Yorkers are not aware of Schuyler’s work.

At the ceremony, John Finley, New York’s Commissioner of Education, recalled that early in the Revolution, the patriotic Schuyler had said “as for me and my house, we will serve our country.” He noted that that “the State takes title not only to its walls and the little bit of earth on which it stands, but also to the glorious memories which belong to the house.” He acknowledged Schuyler’s historical importance. But, a hundred years later, the current Education Department Social Studies Framework, which covers New York history at the grades 4 and 7/8 levels, does not mention Schuyler.

To many leaders of his time, Schuyler personified the image of Albany: reliable, businesslike, confident, practical, industrious, skilled at partisan maneuvering but always putting principle and country first.

“This gentleman is the soul of Albany County … sincere, well bred, and resolute” a fellow delegate to the Continental Congress observed in 1775.

Schuyler had flaws. He was a slaveholder. Slavery was legal in New York as a colony and early state, but a despicable and inhumane practice. It can be explained but it cannot be excused. It is a shameful blot on Schuyler’s reputation. But he apparently had freed or sold his slaves by the time of his death.

His extensive landholdings and commercial interests in Albany and the Saratoga region made him wealthy. He used his Albany mansion for meetings on political and military strategy during the Revolution and hosted visiting VIPs such as George Washington and Ben Franklin.

A persuasive advocate, Schuyler at first opposed violent resistance to British colonial rule, but also asserted that people cannot be taxed without their consent. Gradually despairing of compromise, he moved – and convinced others in New York to move – toward assertion of colonial rights by force of arms.

By April 1775, after the clashes at Lexington and Concord, he framed the choice clearly for fellow New Yorkers: “Fight for right and freedom” or “Be ruled by a military despotism.” Later he recalled that “we were never more determined to contest for our rights than at this moment.” Schuyler was appointed one of four major generals under George Washington in 1775. There were no precedents and few resources for the work to be done. “…the combating of confusion and disorder was a never-ending challenge,” says his biographer Don Gerlach. Action required improvisation and staying on the initiative. He cobbled together an army from New York soldiers, Continental troops and New England militia who sometimes chafed at taking orders from a “Yorker.” He bought some military supplies with his own credit as backing. Sometimes he appealed to those back home. Albany authorities sent agents from house to house to buy blankets in response to one urgent appeal.

Appointed by George Washington to command the “Northern Department,” he initiated an invasion of Canada in 1775, but illness forced him to delegate execution to a subordinate. The invasion failed.

His army foiled a British invasion of New York in 1776. Facing another invasion from the north in 1777, Schuyler bought time through strategic retreats that stretched British supply lines, blocked trails, kept supplies from the enemy, assembled guns and provisions, and brought in more troops.

Schuyler sent a force to break up an attack from the west, urging citizens there to “show no sign of fear; act with vigor and you will not only save your country but gain immortal honor.”

Removed from command after a subordinate surrendered Fort Ticonderoga to advancing British forces, Schuyler insisted on a court martial (which acquitted him of any wrongdoing) and endorsed his successor, general Horatio Gates, a former rival. General Gates continued and intensified the strategies Schuyler had initiated, including obstruction of trails and limited attacks that wore down the enemy.

The new State Constitution was finished and promulgated on April 22, 1777. On that day, New York State came into existence. The first elections for state offices were held quickly thereafter, in June. Schuyler ran for governor and was favored by John Jay and other leaders who had led in writing the constitution. But Schuyler lost to another general, George Clinton, who became the new state’s first (and would be its longest tenured) governor. Schuyler was surprised and disappointed but accepted the results without question, writing to his friend John Jay that Clinton “had played his cards better than expected.”

In the fall, Gates beat British general John Burgoyne at the Battle of Saratoga. It turned out to be the turning point of the war. Schuyler had done much to engineer and launch the campaign which resulted in the victory. In John Trumbull’s famous painting of British General John Burgoyne surrendering to Gates on October 17,1777, Schuyler appears to Gates’ left, one of a dozen men, and in civilian dress (he was out of the Army by then). If he felt resentment at Gates being fully credited with the defeat of the British, he did not show it.

With Schuyler’s permission, after the battle General Burgoyne and his aides were held under house arrest at Schuyler Mansion before being repatriated to Britain. Schuyler and his wife, Catherine Van Rensselaer Schuyler, were gracious to their temporary “prisoners/guests,” despite the fact that Burgoyne had ordered the burning of their summer home near Saratoga (in the present-day Village of Schuylerville). Burgoyne described his sojourn in “a very elegant house” with “a table with more than twenty covers for me and my friends and every other possible demonstration of hospitality.”

Commissioner Finely related another story, which he acknowledged was perhaps apocryphal, at the 1917 dedication ceremony. The Schuylers hosted a banquet for Burgoyne during his stay at their home, and at the end Burgoyne made a toast: “The future will see America and England united to save the world. Let us drink to this sacred union.” True or not, it resonated at the time of the dedication service when the two nations were fighting together in World War I.

Schuyler served as one of New York’s first U.S. Senators, 1789-1791 and 1797-1798. He was a strong proponent of the U.S. Constitution and supported policies to strengthen federal authority, including the fiscal plans developed by the first secretary of the Treasury, his son-in-law, Alexander Hamilton. He was a moving force in developing the Federalist Party and an early practitioner of responsible partisan politics. He stayed active in New York politics, helping John Jay defeat George Clinton for governor in 1795, but also accepting the result when Clinton ousted Jay in 1801.

Serving as a State Senator for three terms in the 1780’s and 1790’s, Schuyler helped enact and flesh out financial and other policies for the fledgling state.

He was one of the original members of the New York State Board of Regents, 1784-1804 and played a leading role in the chartering of Union College.

With business partners, he initiated the state’s first canal. It was not successful but piqued public interest and helped pave the way for the Erie Canal years later.

The Village of Schuylerville in Saratoga County and Schuyler County are named after him.

There are lots of exciting public events scheduled at Schuyler Mansion this year. As Governor Whitman noted a century ago, with a touch of rhetorical hyperbole in praising Schuyler, “every drop of his blood thrilled with zeal for public service.” Philip Schuyler deserves more historical attention, here in his home state and beyond. The centennial of Schuyler Mansion State Historic site is an opportune time for that.