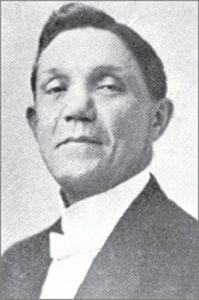 He was known to all as Neil Litchfield, but some sleuthing was necessary initially to uncover his story, for he at times went by the names Allen and Cornelius (the latter of which “Neil” was extracted from). They all proved to be one and the same person — Cornelius Allen Litchfield.

He was born in April 1855, educated in Lewis County schools, and attended Cornell University in Ithaca, about 100 miles south of his hometown. College opened up a world of possibilities, and it was there that Neil discovered and developed a deep interest in elocution, defined as “the skill of clear and expressive speech, especially of distinct pronunciation and articulation.” This became his passion, and during his college years, particularly as a junior and senior, he conducted numerous public readings in northern and central New York.

Among his instructors at Cornell was the renowned Hiram Corson, chair of English, rhetoric, literature, and oratory. During Litchfield’s college years, Corson published An Elocutionary Manual and was considered among the best teachers in the business — the perfect mentor for a young man hoping to become a professional orator. In addition to working with Corson, Neil attended elocution courses at Colgate University in Hamilton, New York.

Entertainment of the day included plays, concerts, orations, and readings ranging from comedic to dramatic and pathetic (sad and/or poignant). Many of these were stirring in nature, and were often performed during a full-costumed impersonation of the subject, much like historical reprisors do it today (including this one who appeared recently in the Adirondacks). The majority of these shows were held in the few spaces large enough to accommodate crowds — churches, schools, and town halls.

While earning a living as a teacher, Litchfield performed at such venues in Turin, Watertown, Oswego, Cazenovia, Utica, Syracuse, and dozens of other communities, building a reputation as a stellar performer. He also continued taking what he called “special courses of instruction with the best teachers of elocution and platform art in the United States.” While dramatic readers, actors, and musicians were entertainers, “platformists,” according to The Lyceum Magazine, also attempted to educate the audience in some way on an “appreciation of the higher and better things in life and culture.”

By the late 1870s, his repertoire had expanded to include writing, directing, and performing in sketches and plays with singers and other actors. Newspapers in northwestern and central New York praised his acting skills and marvelous voice. In 1877, the Chenango American assessed a recent performance: “He gave a select elocutionary reading … his selections were well chosen and were very finely read, exhibiting a well-trained voice of much power and strength.”

In 1880, the new play Shipwrecked was performed by the Syracuse Dramatic Company, earning praise in the Cazenovia Republican for two of its stars. “Mr. Neil Litchfield is a gentleman who has won an enviable reputation on the stage, and acts his part to perfection.” Of Neil’s co-star, Lyman Baum, it was said, he “cannot be beaten on any stage,” and “is truly marvelous.” That actor was later known as L. Frank Baum, a prolific author best remembered today for penning The Wonderful Wizard of Oz.

Encomiums followed as Neil toured New York State for the next few years, honing his talents and creating new characters. From the DeRuyter New Era (northeast of Cortland): “Mr. Litchfield’s ability is far above that of the average elocutionist. Both his range of voice and his perfect adaptation to the diverse characters shown forth are very remarkable.” From the Cazenovia Republican: “Mr. Litchfield seems to have perfect control of his voice, and we bespeak for him success wherever he goes. His rendering of Asenath and Biddy McGinnis at the Photographers was superb.”

By the mid-1880s he was touring in other states, and enjoyed great success over the next decade. There were stints with Bob and Eva McGinley’s Company, Dick Oglesby’s Troubadours, the Mrs. Tom Thumb Company, and the Vivian De Monto Company, involving extensive tours through Wisconsin, Minnesota, Indiana, Illinois, Iowa, and other states, visiting small towns and large cities. In Alameda County, California, his performance in late 1887 received a typical review: “The lovers of humor in this neighborhood filled Good Templar’s hall last Monday evening. Prof. Neil Litchfield, the elocutionist, humorist, and character mimic, entertained them for an hour and a half with a genuine treat of humorous, comedy, pathetic recitations, and witty, accurate impersonations and contortions. Prof. Litchfield is an immense impersonator, a whole show, as the impressible think.”

While touring, he met and became smitten with Harriet (Hattie) Trask of San Francisco. The two were married in April 1889, and soon after formed their own traveling company, Litchfield’s Oddities. Featured were sleight-of-hand experts, acrobats, a dog circus, and Hattie as a singer and comic actress. But undeniably, the star of the show was Neil, who perfectly mimicked various characters to such effect that, as many reviewers noted, audiences roared with laughter. To popular acclaim, they toured several western states, and repeatedly visited dozens of towns and large cities in California. In April 1892, the Los Angeles Herald wrote, “Litchfield’s comedy troupe gave a splendid performance at the opera house last night…. Neil Litchfield has the reputation of being the greatest character impersonator now on the road. His facial contortions are remarkable and amusing.”

Next: On to greater heights and a new partnership.