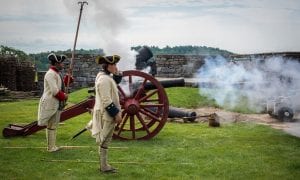 On July 22 and 23, Fort Ticonderoga commemorated the 259th anniversary of the 1758 Battle of Carillon with a series of events called “Montcalm’s Cross,” named after French General Louis-Joseph de Montcalm.

The Battle of Carillon was fought on July 8, 1758, during the French and Indian War. It was the bloodiest battle of the Seven Years War fought in North America, with over 3,000 casualties. French losses were about 400, while more than 2,000 were British.

French engineer Michel Chartier de Lotbinière constructed Fort Carillon on the shore of Lake Champlain between 1755 and 1757, but the battle was fought behind breastworks about a kilometer west of the fort.

Though British troops under General James Abercrombie outnumbered the French defenders five-to- one, lack of artillery and poor coordination resulted in a military disaster for the attacking army. 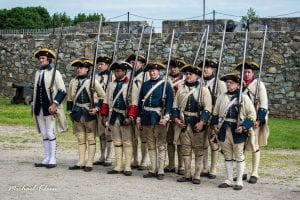 Montcalm’s Cross Reenactment Weekend was a two-day event. On Saturday, reenactors re-created the British advance from Lake George Landing, during which an encounter with a lost French patrol resulted in the death of British commander Lord Howe.

Visitors had the opportunity to speak with reenactors portraying colonial volunteers from Massachusetts and French Captain Trepezec’s piquets. Piquets, or pickets, were troops specially picked to scout ahead and warn of the enemy’s advance.

Both days featured fife and drum parades and inspections of the armies, as well as regular tours and artillery demonstrations. 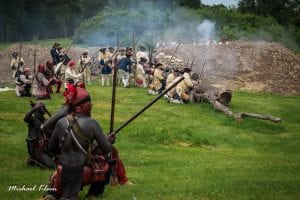 Sunday’s battle was fought behind re-created French fortifications and abatis, felled trees designed to obstruct the enemy’s approach. French and British regulars, as well as American Indians, rangers, and militia, were all represented.

The weather was perfect and the commitment to historical accuracy was impressive, from the authentic equipment to the diverse uniforms worn by various units in the battle. Many of the reenactors spoke French.

French troops stood in four rows behind their breastworks. While the first rank fired, the rear ranks loaded muskets and passed them to the front, ensuring a consistent rate of fire. Whenever the British threatened to advance through the abatis, irregulars and American Indians allied to the French rushed out to drive them back.

The whole reenactment lasted about 30 minutes. Because of the underbrush, abatis, and slope of the ground in relation to the audience, it looked like French forces were firing at invisible attackers for most of the event. Otherwise, it was an exciting and educational afternoon.

Though a decisive victory for the French, the Battle of Carillon only delayed British capture of the fort. French forces abandoned it in 1759 rather than face the prospect of a siege.

A video of the Carillon reenactment at Fort Ticonderoga is available here.