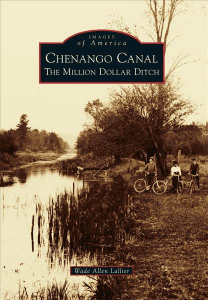 A new book by author Wade A. Lallier, Chenango Canal: The Million Dollar Ditch (Arcadia Publishing, 2017) chronicles the story of a Central New York State canal and how it changed the region. In 1825, the Omnibus Canal Bill had called for a survey of a canal linking the Susquehanna River at Binghamton to the Erie Canal in Utica. The idea of a canal was well received in the Chenango Valley but was opposed by many outside it.

After eight years of legislative battles, the canal was finally authorized in 1833 with a proposed million-dollar budget. Against seeming insurmountable odds, the 97-mile canal was completed in 1836. Touted as “the best built canal in New York State,” the canal was never profitable for the state, but it did bring a measure of prosperity to the communities along its length, delivering cheap coal from Pennsylvania to emerging steam-powered factories.

Wade Allen Lallier, a resident of Deansboro, holds a bachelor’s degree in social studies from Syracuse University. He is a member of the Chenango Canal Association, which is dedicated to preserving the Chenango Canal and its history. For Chenango Canal: The Million Dollar Ditch, he selected photographs from private collections, library special collections, and local and county historical societies.