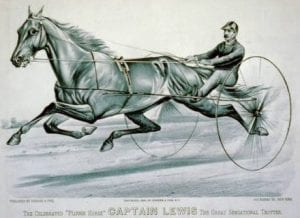 Horace Brown, perhaps the greatest horse trainer from the northern Adirondacks and foothills, attained fame and many trotting victories in America, Europe, and Russia. Of all his successes, none was more acclaimed than the marvelous season of 1882. Collectively, it was among the unlikeliest stories in sports, an early equivalent of the US hockey team’s stunning Olympic victory in 1980, when a group of fresh, largely untested amateurs came together and conquered the world’s best.

The 1882 story became legend and was often repeated, but the first couple of names involved aren’t absolutely certain. Bear with me briefly through the details, for the story will get better. By most accounts, the horse in question was bred by Jeff Brown of Dresden, on the western shore of Seneca Lake in the Finger Lakes region of New York. In the vicinity of Dresden, he sold it to Richard Brown (and now the names are certain,) who sold it to Lawrence Bogert, who sold it to Stewart L. Purdy of the town of Benton.

The stallion did have known breeding lines according to various horse magazines: “Sired by Spink [a grandson of Henry Clay]; dam was a Wallace mare; and grand dam Lucy Long, a famous running mare.” Henry Clay is referred to by the Smithsonian Institution as “the Father of American Trotting Horses,” but was born in 1837. This as yet unnamed horse was foaled around 1874, and although there was some racing talent in his genes, the Clay line was on the decline and had largely expired by the late 1800s. Even knowing that there was some potential in his background, none of the owners of this particular unnamed horse had seen anything special in its capabilities.

So what had occurred by that point was the typical selling and reselling of a horse, as happened in farm communities from coast to coast. With no obvious special value, the beast, which had the odd combination of a rough head and smooth body, was used for plowing fields and handling other farm duties as recently as spring 1882.

And here’s where it gets interesting. Bogert, one of the previous owners, decided to “clip” his mount. Becoming a gelding proved distasteful to the horse (I don’t know about you, but I’m completely sympathetic), which took a strong dislike to Bogert (who wouldn’t?). After the “alteration,” it refused to let him even apply a bridle, causing Bogert to eventually give up and offer the horse for sale. But its unusual look, plus a lump on one of its front legs, the result of bumping against a reaper while pulling it, hardly made the horse an attractive buy. No one was interested, even the local livery (basically, a horse-taxi service), which turned down Bogert’s price of $175. Finally, farmer Stewart Purdy acquired the horse for $150, hitched it to a partner, and used the team to plow and plant 40 acres of fields.

But Purdy noticed that when traveling down the road, the horse revealed a jaunty, anxious-to-run stride. To explore the animal’s potential, he visited the trotting facility at Preemption Park in Geneva, New York, where the horse was linked to a sulky for the very first time and showed some impressive trotting speed. (In trotting, a front leg and its diagonal opposite rear leg work in unison; in pacing, both legs on the same side work together.) The next day he did the same at Penn Yan, and on May 30, he ran again at Geneva, after which Purdy sold the horse to Alexander Tower of nearby Lyons, New York, for $300, earning a tidy profit.

On June 7 at Lyons, Tower entered Captain Lewis (named after a prominent Geneva man, Joseph Lewis) in his first race, where he topped four trotters to win $200 (about $5,000 in 2017). After a second similar win the next day, Tower sent the horse to the Rochester stable of North Country native Horace Brown for training and development.

The results were stunning. Under his command, Captain Lewis turned in some very fast half-mile performances, and with confidence, Horace entered him in a three-minute race at Olean, which he won in three straight heats. (The first horse to win three heats is declared the day’s winner.) Soon after, Rochester horseman Burt Sheldon negotiated a deal with Tower, who sold Captain Lewis to him for a sum widely reported as $6,000 — twenty times what Tower had paid to purchase him less than two months earlier (and the modern equivalent of $145,000).

Just a few days later, in early August, Captain Lewis was entered in a Grand Circuit (the highest level) race at Buffalo, in effect pitting a raw horse — nearly fresh off the farm — against the best professionals that had been bred, trained, and driven to win trotting races.

That day, before a raucous, excited crowd of 12,000, a star was born. In the first heat, Captain Lewis got off to a good start. With a thousand feet to go, the lead expanded and he won easily against Gladiator, Allegany Boy, Barbara Patchen, Barrett, and Kitty Wood. At that point, bettors were convinced something was up — that this horse was likely a ringer (an expert passed off as a novice in order to unfairly earn winnings). After the first heat, even offers of $50 to $7 odds were spurned.

In the second heat, Captain Lewis took the lead early and widened it during the race’s second half to win going away. All bets were off for the third heat, which again went to Captain Lewis.

Complaints about fakery and passing off an experienced horse as a newcomer were dismissed when knowledgeable horsemen on hand confirmed Captain Lewis’s background. A new moniker, the Plow Horse, was applied, and henceforth was used as often as the horse’s official title.

Top drivers in the trotting world were astonished at the horse’s accomplishments. The public, meanwhile, was completely enamored of the underdog, a hard-working, plow-pulling civilian horse taking on the establishment and turning harness racing on its head.

In mid-August, despite a bothersome case of pinkeye, Captain Lewis won the Grand Circuit race in Utica, again in three consecutive heats. The New York Sun described him as “a plain-looking horse of dark chestnut color, 16 hands high … long-gaited, and appears a little loose for a horse that several sharp horsemen confidently predict will make a record faster than has ever yet been hung up. He has proved the surprise of the circuit, however, so far, and if he does nothing to add to his fame hereafter, the sportsmen will talk for years about the plough horse that cleaned out the pool box at Buffalo.”

After getting over a cold, the Captain next appeared on the Grand Circuit at Charter Oak Park in Hartford, Connecticut. As the Boston Globe later reported, “Captain Lewis, the horse who helped plough forty acres of wheat last May, won his first race at Lyons, New York, June 7 last, and has been first in his class throughout the circuit, took the 2:33 race with ease.” Barrett had battled neck and neck through the backstretch, but after the turn, Captain Lewis pulled ahead by a length and maintained it to the finish. He then won the second heat in similar fashion by sustaining a two-length lead. Saving the best for last, he won the third in a laugher, expanding an early three-length advantage and, as the Globe put it, ‘Captain Lewis continued to increase his lead and finished in a jog.’ ”

In early September, he did the same at Hampden Park in Springfield, Massachusetts, winning the first heat easily, the second by about a length, and the third by eight lengths after easing up at the finish. Next, at Mystic Park in Boston, Captain Lewis suffered from what the Globe called “a bad break at the start” and finished six of seven horses. He won the second heat in a very close race, and led wire to wire in heats three and four to win the day.

A week later, at Beacon Park in Boston, Captain Lewis trailed at the midway mark in heats one, two, and three, but came from behind to win them all. It was sensational stuff, drawing thousands of new followers to trotting tracks and creating a legitimate, popular star in the world of sports. Plow-horse mania continued at the Grand Circuit races at Island Park in Albany, where Captain Lewis won in three straight heats, and at Rochester, where he won in four heats.

Horace Brown was not only the horse’s trainer, but he also drove Captain Lewis to most of his wins and to his fastest official speed. While Horace received a lot of publicity and they were an incredible team, there was no doubt that Captain Lewis was the star of the show.

By season’s end, statistics revealed a remarkable campaign. The great Plow Horse, an amateur among champions, had won all ten of his races and had lost only two individuals heats. To experienced horsemen and the admiring public, it was a truly outstanding feat.

In December, the asking price for Captain Lewis was $20,000 (about a half million dollars today). He was the biggest, best-known name in the sport because of the sudden ascension to fame from very humble origins, and then somehow winning every race he ran. 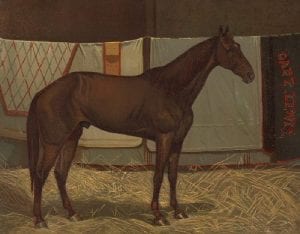 In retrospect, it all came to an end with similar, shocking suddenness. Even as plans were made and a racing schedule was established for the next season, rumors circulated that Captain Lewis was lame. His name was entered in races at Chicago, Hartford, and Boston, but by race time he was scratched in every instance. With his horse’s value badly diminished and racing fans wondering what might have happened, owner Burt Sheldon confirmed that Captain Lewis was indeed hurt and would be unable to enter any races prior to the Hartford meet — but that fell by the wayside as well. The reasons were not explained, but one version ascribed the problem to surgery performed on the aforementioned bulge on one of Captain Lewis’s legs. During the operation, it was said, tendons had been cut, and the horse could no longer run.

While handling a large stable, Horace Brown never gave up on his famous steed, continuing to train, nurture, and care for what had become his prize pupil. With great dedication, he stuck with it, and in 1886, more than three years since Captain Lewis had raced competitively, it was announced that the now 12-year-old had been turning in some good times under Horace’s hand and would begin racing again. Reporters wrote of his “new lease on life” and “coming out of retirement” as his name appeared on racing entries at Cleveland and Yonkers.

Alas, he was scratched again, simply deemed incapable of enduring the stresses of competitive racing. There was great disappointment for Horace and the Captain’s adoring public, but for decades, the famed Plow Horse’s year like no other, that unlikely, glorious season of 1882, would be recalled as both memorable and historic. Deservedly, Horace and his horse had become legends of the sport.