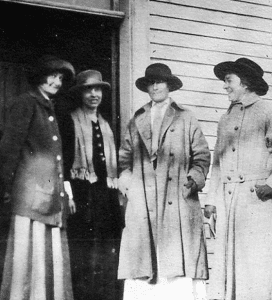 Gathering Woodstock Women: A Celebration of the New York State Women’s Suffrage Centennial, the first major exhibit recognizing many remarkable women from Woodstock’s past, opens at the Historical Society of Woodstock’s Eames House Museum on Friday, June 16 with a reception from 7 to 9 pm.

On Saturday, June 17 at noon, at the Eames House, Town historian Richard Heppner and Janine Fallon-Mower, co-authors of Legendary Locals of Woodstock, will speak on The Varying Roles of Women Throughout Woodstock History. The Museum is located at 20 Comeau Drive, Woodstock. Admission is free.

Woodstock women were a vital part of the community and contributed to the town’s unique character long before the advent of the 1969 Woodstock Festival. From diverse backgrounds, they wove their lives into the fabric of their distinctive town. Gathering Woodstock Women recalls scores of 19th to 20th century women in photographs and prose by current residents who knew them or admired them.

The exhibit is part of an ongoing effort to build the Historical Society’s People Archive to include a more complete representation of women. Written contributions and images obtained during preparation for the exhibit will be maintained in the HSW Archive.

Gathering Woodstock Women has been in the making since August 11, 2015, when the Woodstock Town Board passed a resolution to mobilize recognition of the Town’s historic women from the years 2017 to 2020 and beyond to celebrate both the New York State and National Women’s Suffrage Centennials. While 2017 is the centennial observance of the 1917 victory of women winning voting rights in New York State, 2020 is the centennial of the ratification of the 19th Amendment to the U.S. Constitution that guaranteed all American women the right to vote.

The exhibit will be open on Saturdays and Sundays until September 3, 2017, from 1 to 5 pm.