Women won the right to vote in New York State in 1917, but the story really began much earlier and with particular fervor in the mid 19th century.

In the 1840’s, upstate New York was a hotbed of radicalism. The “Second Great Awakening” brought with it spiritual revivalism, penal and education reforms, abolitionism and the temperance and women’s right movements. This turbulent atmosphere of ideas and events was not unlike the cultural upheaval of the 1960s.

In 1848 Elizabeth Cady Stanton, Lucretia Coffin Mott and several other women gathered around a tea table in Waterloo, New York and drafted the “Declaration of Sentiments” based upon the Declaration of Independence. By inserting into the text that women, as well as men, were created equal, they renewed the revolution that was started seventy two years earlier in 1776. The protracted and arduous road to women’s right to the elective franchise took until 1917 to be realized in New York State and not until 1920 in the entire United States.

This summer, the Athens Cultural Center is celebrating the suffrage movement with the exhibition: “A Declaration of Sentiments: Reflections on the Centennial of Women’s Right to Vote in New York State.” The show is designed and curated by Carrie Feder who also curated the popular history and art shows “ICE” and “Taking Root: Caniskek and the Meeting of Two Worlds” at the Cultural Center and who is part of the team that created “The Parlors,” an immersive experience that combines technology with historic rooms at the Thomas Cole House in Catskill. Ms. Feder has a particular fascination with the mid 19th century. “A Declaration of Sentiments…” starts with those turbulent and idea laden times and uses it as a nexus for further exploration of the women’s suffrage movement. The exhibit is both a historical and conceptual exploration of the centennial of women’s right to vote and a literal declaration of sentiments by contemporary women artists as they reflect upon the struggle in the past, in the present, or in their own lives. Rather than attempting a linear retelling of the complex historical tale, Ms. Feder evokes the atmosphere of the day by placing historical text, images, and objects in combination with contemporary artwork that express themes and realities that were central to women’s lives in the 19th century and propelled the struggle to acquire the right to vote at a time when women were considered not much more than chattel. But the fight for women’s rights in a man’s world was not the only battle for freedom at that time. Hand in hand with the women’s movement was the abolitionist movement and reform efforts such as temperance. Religious and philosophical discussion embraced ideals of the past but also questioned moral standards of the day such as the acceptability of human bondage. Imagery and objects like everyday household items, textiles, sewing implements, journals, school books and religious texts delineate an established world, but also tell the tale of a society in flux that questioned personal versus societal rights, freedom versus restriction, gender roles and symbols, family responsibilities and relationships, and increasingly…the power of protest. 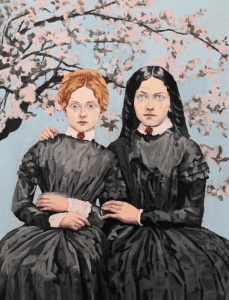 The textile arts, for example, have always been associated with women’s work and interestingly enough, the use of textiles and allusion to clothing is often found in contemporary feminist art. The work in this show which associates itself with this particular aspect of the past has been chosen to reveal this connection but also to surprise and to connect to larger cultural themes. Kate Hamilton’s oversized camisole flutters with the slightest breeze and can be manipulated to move like a giant empty puppet. Laurel Garcia Colvin uses traditional toile fabric patterns of bucolic genre scenes as backdrops to pointed contemporary political commentary, and Tricia Wright wryly refers to women’s domestic duties as well as clothing and textiles for the home by creating punched paper doily collars embedded with everyday hardware like drain inserts and stoppers. Though quilt making was a utilitarian task for 19th century women, it was infused with instinctive and often very sophisticated pattern making. Consciously or unconsciously the urge to pattern comes through in contemporary abstractions based on geometry and color. Jeanette Fintz’s dynamic geometric abstractions play upon traditional pattern making while bringing it into a contemporary and conceptual playing field. In watercolors such as “Quilt on Stilts” and imagery of fabric draped mazes, Ruby Palmer refers to homemade textiles as well as elaborate environments in which we either live or are entrapped.

Other artists in the show use 19th century imagery or text as a physical basis or starting point for their work which touch upon larger themes. Louise LaPlante paints over antique pages of texts, Ryder Cooley draws on carte de visite’s of Victorian women, and Carole Kunstadt constructs precious objects made of, among other things, shredded religious psalm books of the 1840’s. Portia Munson’s collections of disposable objects are counterpoints to the (used and reused) objects of the nineteenth century while Brece Honeycutt’s sculptures of commonplace vessels such as pitchers and wash tubs create a double entendre allusion to the daily toil of the 19th century housewife. Claudia McNulty comments upon the issue of enslavement, then and now, while Jenny Feder celebrates the many faces of the characters involved in the women’s rights movement. Melora Kuhn draws on the past to present an altered but evocative history, Susan Wides refers to the Victorian language of flowers while Christy Rupp’s sculpture of “ Estrogen and Testosterone Molecules” is paired with 19th century Currier and Ives imagery of men and women’s stages of life from birth to death. The grouping of abstracted figures in motion by Susan Mastrangelo remind us of the momentum of the struggle while anchoring it in the present day. Others may not allude to specific historic objects or topics but like Valerie Hammond or Yura Adams create intuitive, atmospheric works that powerfully allude to a women’s inner journey. An exhibit such as “A Declaration of Sentiments,” mixes art and artifacts and asks both the artist and the audience to look at history and art in a new and provocative way. 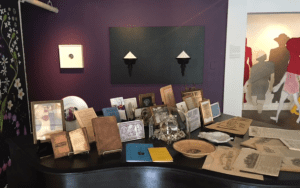 In a tumultuous year in which we find ourselves questioning many of the things we have taken for granted, the history and power of the suffrage movement takes on increasing relevance. The beginnings of the movement in the “burned over district” of upstate New York takes on special relevance today as one asks what particular cultural elements came together to create a moment in history that spurred women on to fight oppression in their own and other’s lives? In a time when their voices had to be heard through printed broadsides, pamphlets, books, speeches and gatherings rather than the instant modes of communication that we rely on today, it is even more extraordinary that a few women were able so powerfully to make themselves heard around the entire world.

One hundred years later, in celebrating what is described as a “messy and militant movement” we are given the chance to reflect upon our past and examine how it has formed our present. In the aftermath of an election year that brought us our very first female presidential candidate nominated by a major political party, the question must be asked: how much has changed and how much has stayed the same?

“A Declaration of Sentiments: Reflections on the Centennial of Women’s Right to Vote in New York State” will be at the Athens Cultural Center 24 Second Street, Athens, NY through August 20, 2017. Gallery hours are: Fridays: 4 to 7pm, Saturdays: 2 to 7pm, Sundays 1 to 4 pm and by appointment. Call (518) 421-3443 or click here. Images relating to themes in the exhibit are being posted on Instagram.

This event is made possible in part with public funds from the Decentralization Program of the New York State Council on the Arts, administered in Greene County by the Greene County Council on the Arts through the Community Arts Grants program as well as the Peckham Family Foundation, the Athens Community Foundation, Verdigris Tea, Price Chopper/Market 32, Staples and others.