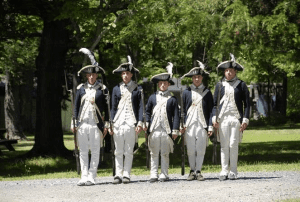 The New Windsor Cantonment State Historic Site and National Temple Hill Association will present a night of Revolutionary War military drills, musket firings and other period activities on Saturday June 24 from 7 to 9:30 pm.

The authentically-constructed log huts were commissioned by the Town of New Windsor during the Bicentennial of the American Revolution to highlight their historic property, encompassing a large portion of the 1782-83 final winter encampment of the northern Continental Army. This property is currently managed by the National Temple Hill Association on behalf of the Town of New Windsor. Primarily responsible for the preservation of a large portion of this encampment site, the National Temple Hill Association also operates the mid-18th century stone house owned by James Edmonston that was used for a short time as a headquarters by Major General Horatio Gates.

Photo: Continental Army Soldiers from the 7th Massachusetts Regiment Drill on the Grand Parade at the New Windsor Cantonment, provided.