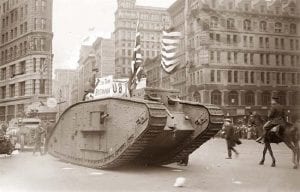 This service information is particularly valuable because most World War I Army service records were destroyed in a 1973 National Personnel Records Center fire. New York’s information, however, exists for exploration only because, shortly after World War I, New York’s adjutant general gathered the military records for New Yorkers.

Updated regularly, the site includes a statewide calendar with more than 40 WWI events and exhibits. Commemorating this year’s 100th anniversary of the United States’ entry into World War I, the site features resources on the significant role New York and New Yorkers played in the war, and a digital tour of New York historic sites connected to the war. Visitors can search through the Roll of Honor that includes more than 13,000 New Yorkers who died in World War One, profiles of the 25 New Yorkers who were awarded the Medal of Honor – the nation’s highest military honor – and information on regiments that served.

Additionally, on the website, New Yorkers are encouraged to share stories and photos of loved ones who served in the war, or submit an event that honors those who served. More than 500,000 New Yorkers served in World War One. Click here to learn more.