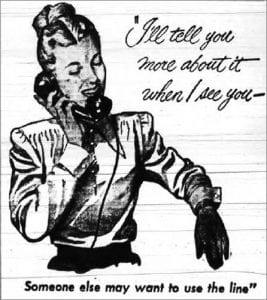 History is often said to repeat itself, or to come full circle, but the same is seldom said about technology, which by its very nature constantly improves and leaves old ways behind. But as a follow-up to last week’s piece on heroic telephone operator Ida Blanchard, here’s a look at an old way of doing things that has enjoyed a resurgence of sorts, buttressed by the capabilities of modern telecommunications. We’re talking here about telephone party lines.

Yes, they’ve become a thing again, which should come as quite a surprise if you were lucky enough to experience the original.

The big difference is that today’s party lines are opt-in systems, so you know others are listening (that’s the point). With the old party lines, there was the expectation – OK, the ridiculously faint hope that your conversation was private. Eavesdropping was a very common practice.

In the twentieth century, phone service took about seven decades to permeate the North Country. During that time, various manifestations of party lines were the norm everywhere. They served from two to twenty parties, and in most systems each party had a certain ring, which was actually a mix of short and long rings. Each family had to know their own code so they could answer calls directed to their home.

If that sounds complicated, put your mind at ease, for the reality is that many people knew several or all of the codes on their party line, which helped them decide whether or not they should eavesdrop at any given time. And as many of us can recall, anytime was a good time for listening in.

Another nice touch (take that as dripping with sarcasm) accompanied the series of long and short rings: until the answering party picked up the receiver, the phones kept ringing in everyone else’s homes. But hey – who doesn’t love listening to a phone ring interminably?

Calling someone on the same party line was an interesting adventure. If you can believe it, you dialed their number, hung up your receiver, and waited until you thought the person might have picked up their phone (it was basically a wild guess), at which point you picked up and said, “Hello?” If no one replied, you waited a bit, and if that didn’t work, you either assumed no one was home or you started all over again. What a great system!

Ponder for a moment some other related joys of the party line: a receiver left off the hook, preventing all parties on the line from using their phones; trying to get the line when gossip was under way; sharing the line with parties that included teenagers, who could spend hours on end enjoying chat after chat; hearing other people breathing in the background while you were on the phone (and thinking you couldn’t hear them listening in, of course); the annoying, repeated pickups and loud sighs of exasperation by others hoping to use the line when you were talking; and the loud slamming of the receiver by those same individuals. (Ah, remember the satisfying slam of the phone into its cradle, ending an argument? The minimal click that replaced it at every hang-up marked the end of an era.)

All in all, it sounds like a terrible, unmanageable system, which is why phone companies constantly warned subscribers against being a “telephone hog,” and frequently advertised the rules of party-line etiquette. In 1946, for example, Bell Telephone and local companies offered the following advice in many North Country newspapers:

1) Make your calls brief.
2) Space your calls well apart so others can use the line.
3) If line is in use, hang up promptly and try again in a few minutes.
4) Give right of way to emergency calls.
5) Make as many of your calls as possible during less-busy hours.
6) Always replace your receiver when you finish a call—and please do it gently.
7) Answer all calls promptly. 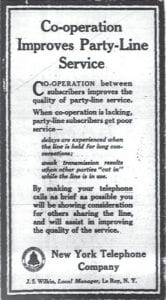 Number five on the list is puzzling: if everyone did as instructed, wouldn’t the less-busy hours end up being the busiest hours of the day? And as for telephone hogs, some companies began using a method of cutting off calls that reached a designated time maximum, usually three or five minutes.

Telephone companies did encourage customers to opt for direct service (a private line), especially between 1900 and 1930, but it was a bit more expensive, so relatively few customers made the change. Private lines also required more copper, and during World War II, companies reversed direction, touting party lines as patriotic (because they preserved copper for the war effort). For that reasons, party lines proliferated and became an accepted part of everyday life, especially in rural places like the Adirondacks.

Beyond the neighbor-versus-neighbor eavesdropping arguments, serious issues sometimes arose in connection with joint service. Occasionally, houses or barns burned because gabbers on party lines refused to hang up when others interrupted to call the fire department. Similarly, death sometimes resulted when those cutting in due to health crises, like heart attacks, were ignored. Such cases spawned lawsuits, and in time it became clear that public safety was at issue.

The new law affected all of the North Country and many other parts of the state: at the time there were 105 telephone companies servicing 1.4 million party-line customers in New York.

Despite the many shortcomings associated with party lines, they persisted in the Adirondack region far longer than most people realize. In 1970, at least some folks in most of the communities in Clinton County (where I lived) still had party lines.

And in December 1976, the Warrensburg-Lake George News ran the following notice: “Those residents having a party-line telephone are reminded by the Fire Siren Operators that it would greatly speed up the fire-call system if they would immediately hang up the phone on hearing the fire siren. In the past, it has happened that the dispatch of the fire trucks has been delayed because firemen cannot be reached due to busy phone lines.”

In the 1980s, just as rural areas were saying goodbye to an old system and its many quirks, new technology called “bridging” enabled phone companies to use their party-line capabilities to great monetary advantage. Back then, long-distance charges were exorbitant, usually from fifty cents to a dollar a minute. By enticing customers to join modernized “party lines,” phone companies struck gold. Monthly phone bills sometimes exceeded a thousand dollars as folks became obsessed with dedicated party lines like Phone-A-Friend, Teen Line, Sports Talk, Date Line, and countless others. 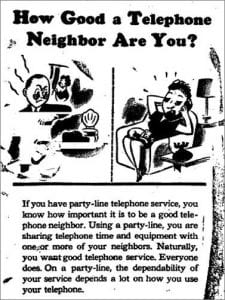 Today, with the proliferation of cell phones, we see a similar phenomenon, albeit for a much lower price. The current version of party lines is big business, but like anything else linked with modern technology, there’s the risk of encountering predators and scammers.

Party lines like the one my family was on back in the 1960s were much safer than today’s and were often entertaining. But for me, at least, they were mostly annoying (the phones, not the family … at least not ALL of them).

On the plus side, there was no need back then for an NSA or some other agency listening in on ostensibly private conversations. We were already doing it to each other! Tongues were waggin’ and everybody knew everybody else’s business. For a while in the 1950s and ’60s, it was touch and go as to which was more entertaining — watching the latest invention (television) or listening in on the phone.

But was it actually fun? For lots of folks, it sure seemed that way. And how could it not be — the word party was built right into its name!