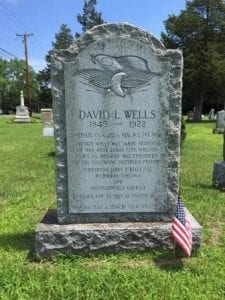 There is an interesting headstone in the Pine Bush Cemetery in Rochester, Ulster County, NY on Route 209. If you are not looking for it, you will definitely miss it. It is unassuming, and partially overshadowed by the gas station next door. A closer look  reveals a remarkable story and the Civil War solider who lived it.

His name was David L. Wells, the son of a carpenter named Charles Wells. He was 18 when he enlisted in Company C of the 120th Infantry Regiment, also known as the Ulster Regiment, as well as Washington’s Guard. It was under the command of  Colonel George H. Sharpe. Wells enlisted in Rochester in Ulster County April 12, 1862. 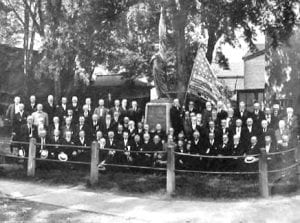 According to the New York State Military Museum, Welles was mustered in the late summer of 1862. He could not have imagined the turn of events that would shake  his life to the core in a little over a year after living Kingston, New York. During battle in James City, Virginia, on October 10, 1863, Welles was captured by Confederate forces. He would spend the rest of the war in some of the Confederacy’s worst prisons.

When captured, the private was sent first sent to Pimberton, then to Libby, and still later Belle Isle, in Richmond Virginia. According to Richmond newspapers, Belle Island was overcrowded. The Richmond Sentinelannounced on December 30, 1863, “It will not be long ere many of the Yankee prisoners, now in confinement on Belle Isle, will have an opportunity of breathing the salubrious air farther South, the Government having made selection of a spot in Georgia, near Andersonville…”  Robert H. Kellog summed up Andersonville quoted here from the Civil War Trust’s webpage:

“As we entered the place, a spectacle met our eyes that almost froze our blood with horror…before us were forms that had once been active and erect—stalwart men, now nothing but mere walking skeletons, covered with filth and vermin…Many of our men exclaimed with earnestness, ‘Can this be hell?’” 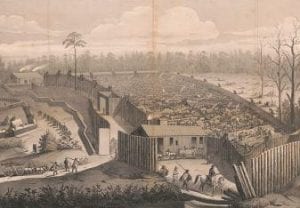 David L. Wells spent the remainder of the war in Andersonville until he was released in Vicksburg, Mississippi on April 22, 1865. He was later mustered out of service June 3, 1865 in Annapolis, Maryland, eventually returning to Kerhonkson. It was here where he took his father’s occupation, carpentry. Wells also married Mary Ostrander, and the couple had three sons. He was remarried by 1884 to Melinda Woods. The couple would have a daughter in 1896. Four years later, the 1900 Federal Census, listed their place of residence as Rosendale. He owned a house, could read, write, and his occupation was listed as a teamster. A teamster was a person who drove a team of draft animals by wagon. Why Wells and his wife eventually left Rosendale was for a factory job. He left the state, and went to Waterbury, Connecticut where he lived in a rented house on Maple Avenue. In the factory, he was a press hand.

Between 1911 and 1921, David L. Wells and his wife disappear from the record only to reappear briefly  in 1914, when his wife Melinda died. She is not buried in the Pine Bush Cemetery, but the Old Pine Grove Cemetery in Waterbury, Connecticut. What is odd that in the Connecticut, Hale Collection of Cemetery Inscriptions and Newspaper Notices, 1629-1934 Melinda is listed as deceased, and her husband is also listed, but not as deceased, but holding a plot in the same cemetery. In the comprehensive inventory of the Pine Bush Cemetery in 1929, by Poucher and Terwilliger, he is not listed which odd. A possible explanation is the headstone was already unreadable.

Wells planned on being buried in Connecticut next to his wife. The headstone in Waterbury, has her name, birth, and death dates. It is above her name that David L. Wells is listed with his birth year, 1845 with a dash indicating he was still alive when the stone was set. David L. Wells died March 22, 1922 at the age of 77. Records for the Pine Bush Cemetery state that he was buried in the cemetery. Some 57 years after his death, in 1979, the VFW 8959 erected a new headstone as a testimony to this man’s Civil War service.