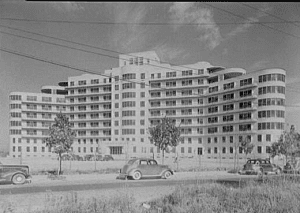 Triboro Hospital, located in Jamaica, Queens, was built to specialize in the treatment of tuberculosis. The facility, which was designed in 1937 and opened in 1941, was constructed during the same era as Welfare (now Roosevelt) Island’s Goldwater Hospital.

Photographer Charles Giraudet produced an extensive visual record of Goldwater before its demolition in 2014. As plans for the mostly-abandoned Triboro facility are being evaluated, Mr. Giraudet has created a complete pictorial documentation of that hospital.

This lecture is sponsored by the Roosevelt Island Historical Society and supported by Bozzuto Management. It is the third in the Society’s series of spring lectures.

This event is free and open to the public.