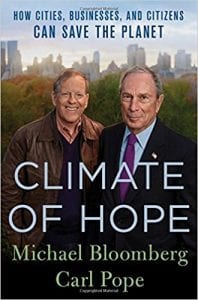 Climate of Hope: How Cities, Business and Citizens Can Save the Planet (New York: St. Martin’s Press, 2017) discusses how cities, businesses, and individuals can take action to confront global warming and improve the environment. There are lots of interesting examples and proposals. But these three themes may be of particular interest to readers of The New York History Blog.

Look to history for guidance

“…to protect large landscapes, we need to rely primarily upon natural mechanisms,” says the book. “Increasing resilience at the regional level begins with a search for the natural defenses that historically provided protection.” The book discusses such things as natural sand dunes and grassy coastal waterways as barriers against ocean surges. The history of the Mississippi River as a case study in letting waterways take their natural courses. But the book also discusses the importance of trees, citing, among other examples, Bloomberg’s “Million Trees in NYC” tree-planting initiative, begun in 2007.

Bloomberg’s chapters in particularly look back at New York City’s history of growth and adaptiveness. There is a good deal here about New York’s exceptionalism. Bloomberg emphasizes that New York, particularly New York City, has always been forward-thinking and proactive, including in environmental policy, and explains how his own initiatives, particularly a broad scale environmental plan and program called, PlaNYC, initiated in 2007, fit the historical pattern of New York’s leadership.

“Cities and nations thrive when leaders anticipate the future,” says Bloomberg. “That lesson is clear from New York’s history.” He offers a number of historical examples, including:

*Oyster beds were common in New York harbor from the time of the arrival of the Dutch until well into the 20th century. They are natural filters that clean water by removing impurities and protect coasts by slowing waves and currents. One of the initiatives described in the book was reintroducing oyster beds and restoring habitats to help they survive and grow.

*New York City constructed the Croton Aqueduct, opened in 1842, after a cholera epidemic showed the need for a source of clean water for the city.

*When Central Park was first proposed in the 1850’s, at a time when Manhattan was still mostly forests and trees, critics argued that it was too big and too expensive. The city council even considered reducing its size. History proved the grand vision of the park’s proponents was correct. “Today, it is the most famous park in the world and there is no one who wishes the doubters had won.”

*The great Blizzard of 1888 paralyzed New York City streetcar and overhead rail transformation system, an environmental disaster that led the city to build its subway system, which opened in 1904 and reached northern Manhattan at a time when it was still farmland.”…the expansion of the New York subway system into underdeveloped rural areas laid the foundation for the city’s growth and enabled its transformation into the economic capital of the world,” he explains.

* The infamous Triangle Shirtwaist Fire in 1911, which claimed 146 textile workers’ lives, jarred New Yorkers out of their complacency about dangerous factory working conditions. This led the legislature to pass a comprehensive safety code over the next few years, making New York a leader in the nation. Recent environmental-related events such as the flooding in New York City produced by Superstorm Sandy in 2012, should be a comparable wake-up call about the need to confront global warming and attendant climate disruption.

*The Empire State Building, opened in 1931, is a symbol of New York’s historic greatness. Bloomberg also uses it as an example of how to rehabilitate and upgrade a historic building to make it more energy efficient and environmentally sound.

There is a good deal of discussion in our field these days about how to get people, particularly young people, interested in history. Broad-scale studies and treatises are important for exploring complicated events or topics in depth.

But what often seems to engage people directly is history they can relate to in the context of their own personal lives. History needs to have meaning and relevance to be popular. People like history that is conveyed in terms of engaging stories. They like excitement and drama. They like to be able to make connections.

This book has some insights for us in this area, but we have to adapt them from the authors’ discussion of the environment to our work in history

The authors argue that it is hard to engage people in discussions of climate issues by projecting dire consequences a half century or a century or more down the road. People want to know how their own lives will be affected, why it should matter to them right now.

Bloomberg and Pope put it this way:

“Telling people that they might possibly save the Earth from distant and uncertain harm is not a great way to convince them to support a particular policy. But what happens when you tell people that they can definitely, right now, reduce the number of asthma attacks suffered by children, save their own families and friends from respiratory disease, extend their own life expectancy, cut their own energy bills, make it easier for them to get around town, improve their quality of life, increase the number of jobs in their community, and strengthen our national energy security – all while increasing the long-term stability of the global climate? Now that’s a different story. And it’s our story, too. The benefits of taking action on climate change are tangible, immediate, and vast….People don’t need a lecture on what may happen to the Earth one hundred years from now….They need good reasons to support change today.”