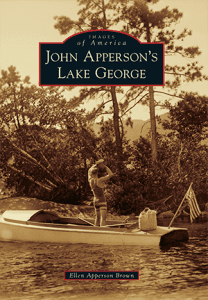 Writing from Virginia where John Apperson spent much of his youth, Ellen Apperson Brown has compiled a collection of captioned photos, along with an introductory essay that reveals much of the public, and private, life of her great uncle, who had such a large impact on protecting Lake George and the Adirondacks.

John Apperson began working for General Electric in Schenectady in 1900. An avid hiker and outdoor enthusiast, he soon found others interested in Adirondack sports such as ice-fishing and skate-sailing, and they started taking camping trips into the region.

He discovered Lake George one summer while attending a boat race, and later devoted his energy and resources to saving the land around the lake from commercial development, logging, illegal squatters, and unnatural erosion. Apperson promoted Lake George for its recreational potential, and recruited conservation help from leading politicians, philanthropists, and journalists, including George Foster Peabody, New York Governor Al Smith, and Franklin and Eleanor Roosevelt.

The books images are drawn from the author’s personal collection, and from the Apperson Collection at the Kelly Adirondack Research Center at Union College.