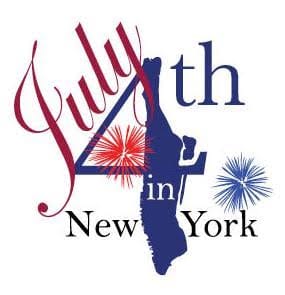 July 2: Independence Day Parade in honor of the Bicentennial of the construction of the Erie Canal:

It was on July 4, 1817 that the first spade of earth was turned at Rome, New York on the construction of one of the most important public works project in American history — the 362 mile Erie Canal from Albany to Buffalo. The Canal connected New York harbor with the Great Lakes and spurred the growth of New York City into the nation’s largest metropolis. This year’s LMHA parade will celebrate this event with a parade starting at Federal Hall on Wall Street going down to Bowling Green/Evacuation Day Plaza and then to the South Street Seaport.

This activity will begin from the steps of Federal Hall on Saturday July 2, around 12:30 pm, as an Old Fashioned Independence Day Parade, similar to the parade sponsored by the LMHA in the past two years. It will begin with speeches from New York political leaders and a reading of excerpts from DeWitt Clinton’s 1815 New York Memorial by a DeWitt Clinton reenactor. It will then be led by the Veteran Corps of Artillery-State of New York, followed by the Color Guard of the Sons of the Revolution of the State of New York, the Sons of the American Revolution and various other patriotic groups, including the Colonial Dames of America. The Richmond County Fife & Drum Corps and other bands will also participate. There will be a further stop at Bowling Green/Evacuation Day Plaza for more speeches and entertainment and then will proceed to the South Street Seaport where the director of the South Street Seaport Museum will speak about the importance of the Canal to the Port of New York.

A new award created by the LMHS last year, this award is designed to honor New Yorkers born outside the United States who have made an outstanding contribution to Lower Manhattan And New York City. Alexander Hamilton was born in the Caribbean and came to the United States at the age of 15. When he died in 1804 at the age of 47, he had been a key aide to George Washington during the American Revolution and as the Nation’s first Secretary of the Treasury had designed the nation’s financial system and created Wall Street as the City’s financial center.

The ceremony will take place around 11 am at Federal Hall at 26 Wall Street immediately preceding the LMHA parade.

The three recipients of the Award identified so far are: (1) Peter Koo, a New York City Councilman from Flushing who was born in Hong Kong and is a prominent business man, sometime called the Mayor of Flushing, (2) Guillermo Linares, former City Councilman and state assembly man from Washington Heights, who was born in the Dominican Republic and previously served as the New York City Commissioner of Immigrant Affairs and currently serves as the head of the New York State Higher Education Student Loan Agency, (3) and James Neary, a prominent restauranteur on the East Side of Manhattan who came to the United States in 1954 from Ireland, when he sold 14 sheep from his family farm to pay for passage to America . We expect to name shortly as a fourth awardee either a prominent businessman active in civic affairs who was born in Southern Europe , or a prominent clergy man who was born in Jamaica.

Continuing a tradition begun in 2014, the LMHA and allied groups will be coordinating a number of historical activities in Lower Manhattan, including the following: