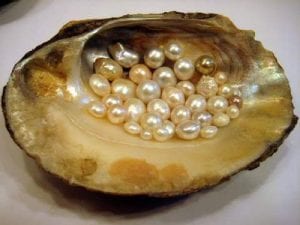 Balsam pillows, maple syrup, spruce gum, custom-made rustic furniture — they’re all products comprised of raw materials native to the Adirondacks. Other businesses, current or defunct, have similar roots, but occasionally in regional history we find homegrown livelihoods that seem an odd fit for the North Country. Among the unlikeliest of those is pearl harvesting — not in the St. Lawrence River or Lake Champlain, but in creeks and rivers of the Adirondacks and foothills.

Pearls, considered the oldest of the world’s gems, are deeply rooted in history dating back thousands of years. They were highly valued in ancient Chinese, Indian, Egyptian, Roman, and Arabian cultures. Polynesia, Ceylon, and the Persian Gulf were the primary pearl sources, but as man is wont to due, excessive harvesting badly depleted the world supply. While the search continued for natural alternatives, the first cultured pearl (cultivated through a process that imitated nature) was developed in the 1890s. Patent battles to control the method continued until 1916, but in the meantime, many countries turned to harvesting pearls from fresh-water clams.

In America, the New Jersey Pearl Fever of 1857 has been likened to the Klondike and California gold rushes. According to famed mineralogist and gemologist George F. Kunz, it began when a pearl, taken from a stream in New Jersey, was eventually sold by Tiffany’s for $2,500 (equal to $70,000 in 2017). For several decades to follow, thousands of individuals took to the streams and rivers of America in hopes of striking it rich. When special finds became known publicly, swarms of “pearl fishers” showed up to perhaps duplicate the success of others. This happened repeatedly for at least seven decades after the New Jersey discovery.

In the Adirondacks and foothills, pearl fever struck in the 1890s, and is generally credited to Malcolm Row of Russell in St. Lawrence County. While Row would become the most prolific pearl harvester in northern New York, and the revelation of his success launched a clam-hunting craze that lasted for years, he was preceded slightly by others, including a jeweler from Malone. In 1880, Charles York and his two brothers had purchased a watchmaking and jewelry business that operated under the name of York Brothers. Later, while working on his own (and it’s a nice coincidence that he lived on Pearl Street), Charles paid a visit to one of his brothers in Gouverneur in spring 1891, and brought along a collection of pearls he had harvested from the Salmon River at Malone.

The story of his pearls circulated through several North Country newspapers, mentioning that one valued at $20 was “as large as an average pea,” and that another person had earned $60 after two weeks of “pearl fishing.” York himself sold several pearls “for good prices — one to Tiffany of New York brought $65.”

That summer, another pearl hunter, George Johnson of Rome, collected several pearls from Kasoag, about 25 miles west of Boonville. It was about a year later when Malcolm Row found his first pearl near Russell. While he may have read about York’s earlier success, Row described his own discovery as serendipitous: after out of bait while fishing in Frost Brook, he used a clam’s innards, and in doing so found a pearl about the size of a pea.

His story was repeated in newspapers, a few magazines, and was cited in state fisheries reports. (Frost Brook does not exist on present or early maps, but it may have been a local name for a small stream … or Row may have given it a false name to keep his success a secret.) Either way, he kept the story quiet and reportedly sent the pearl off to Tiffany’s in New York City, who offered $50 for it. Recognizing his good fortune, and the likelihood of competition if the story got out, Row abandoned his spruce-gum operations and paid a few trusted individuals to collect clams from Frost Brook. By season’s end he had netted several hundred dollars in profit (around $12,000 today). 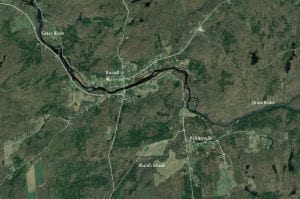 But by early 1893, the secret was out, and with dreams of sudden riches, dozens were soon plying the waters near Russell — some of them employed by Row, but others competing with him. About 20 men took to it full time, and 60 or more men and boys from the immediate area joined the hunt. Their focus was on Plumb Brook, whose tortured path extends north for about 15 miles before joining the Grass River less than a mile slightly southeast of Russell.

Success meant income for locals, but there were side effects. Clams were killed by the process of being pried open, and their innards were discarded. The US Fish Commission provided rough estimates revealing some very telling numbers: the average yield in Grass River tributaries was one pearl in every 500 clams. Hundreds of pearls were harvested, and for each 100 of those, the remains of 50,000 clams were cast aside, many of them on land. By summer 1894, the county board of health posted notices requiring clam innards to be disposed of in running water, for they were otherwise potential breeders of disease. The signs included fines for any violators caught.

Of lesser importance at the time was an inescapable fact: pearl mania was devastating the clam population. But the slaughter continued, and during that same season, Plumb Brook, considered virtually devoid of clams, was abandoned in favor of the Grass River.

Photos: A collection of freshwater pearls (karipearls.com); map of the Russell area and Plumb Brook.