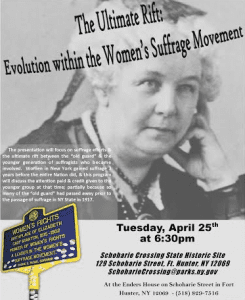 The presentation will focus on suffrage efforts and the ultimate rift between the “old guard” and the younger generation of suffragists who became involved. It will cover how women in New York gained suffrage three years before the entire nation did, and this program will discuss the attention paid to as well as credit given to the younger group at that time; partially because so many of the “old guard” had passed away prior to the passage of suffrage in NY State in 1917.

Helen Martin is the secretary of the Elizabeth Cady Stanton Women’s Consortium as well as a board member of the Johnstown Historical Society and the Elizabeth Cady Stanton Hometown Association. She is a member of the American Association of University Women and also a chairwoman on the Mohawk Valley Region NYS Path Through History Committee. She has been a Council Woman in the City of Johnstown since 2011.

There will be a brief Friends Group meeting to discuss upcoming programs and plans for 2017 prior to the presentation. This is a free event open to the public. Refreshments will be served. This program takes place in the Enders House on Schoharie Street in Fort Hunter.

For information about this event and more, call the Visitor Center at (518) 829-7518 or email SchoharieCrossing@parks.ny.gov.