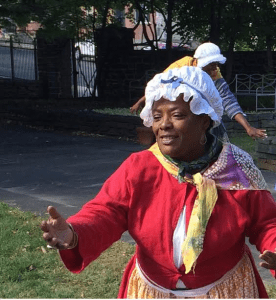 Once a Dutch holiday commemorating Pentecost, Pinkster became a distinctly African American holiday in the Hudson River Valley during the colonial era. During the 17th and 18th centuries, enslaved and free African Americans transformed Pinkster from a Dutch religious observance into a spring festival and a celebration of African cultural traditions. All along the Hudson River and on Albany’s “Pinkster Hill” (the current site of the NYS Capitol), enslaved African Americans reunited with family and friends and celebrated Pinkster with storytelling, food, music, and dance. Other Pinkster traditions, like the selection of the Pinkster King, created opportunities for enslaved African Americans to honor respected members of the community and to subtly mock their white enslavers.

Festivities include presentations and demonstrations by The Children of Dahomey, an educational and performance group specializing in the historical experiences of enslaved Africans and African-Americans in colonial New York. Visitors can participate in The Children of Dahomey’s traditional Pinkster dances and theatrical demonstrations, take part in an instrument-making workshop, and listen in on a storytelling session. In Crailo’s kitchen cellar, culinary historian and hearth cooking specialist Lavada Nahon will be preparing food over the open hearth and interpreting historic African and African-American foodways. Other family-friendly activities will include crafts, games, music, and refreshments. The museum will be open for self-guided tours of the historic rooms and exhibits, including the featured exhibit A Dishonorable Trade: Human Trafficking in the Dutch Atlantic World, currently on display in the upstairs galleries.